This is a tradition that you could imagine causing a lot of problems in the modern-day game, however, it would make for incredible viewing. 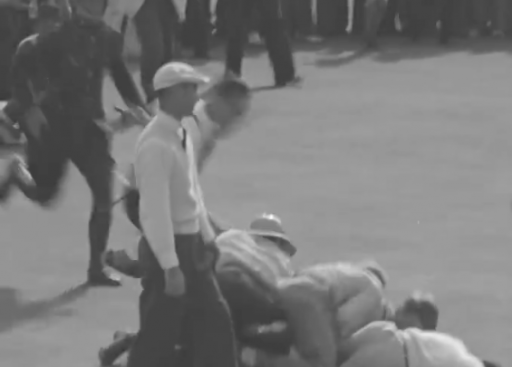 The game of golf has many different traditions and procedures that every player is aware of when playing the game or starting it for the first time.

Shaking hands after you play and wearing smart clothes are the standard traditions that we have all come used to, but footage emerged recently of a bizarre tradition seen at the 1937 PGA Championship.

The tournament was still a matchplay championship back then and American Dennis Shute beat Jug McSpaden on the 37th hole of the final.

When Shute rolled in the winning putt, a section of the crowd ran on to the green and dived at the hole in order to pick out the PGA Champion's ball.

It is effectively a race to see which fan can claim the winner's ball. It is unfortunately unclear where this tradition originated and where it began, but it is incredible to think that this used to happen at tour events.

Golf fans reacted to the footage:

"Didn’t know this was a thing," one fan said.

"I can hear the guy screaming mashed potatoes," one fan commented.

"So the other guy that hasn’t finished his putt in the first video just get a gimmie?" another fan commented.

"Definitely need to bring this back lol," another fan said.

"Kevin Na does that himself," one fan said.

One can only imagine what it would be like if this tradition still happened on the PGA Tour. It is not clear when fans stopped doing this, but you would assume that it brought up severe security and player safety issues.

There have been many moments in recent times where golf fans will have been desperate to sprint on to the green and grab the winner's ball, such as when Tiger Woods won his 15th major title at The Masters in 2019.