Golf fans react as one DESPERATELY unlucky golfer misses out on HOLE-IN-ONE!

This video is the definition of "so close, yet so far"... 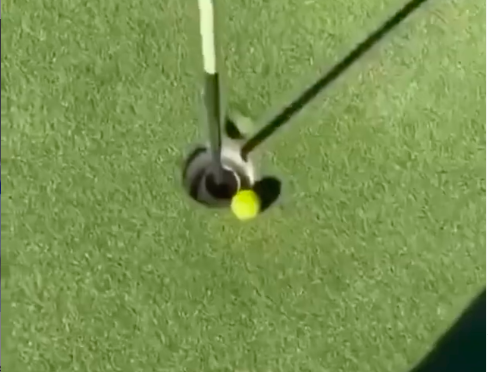 The hole-in-one is one of the most coveted achievements in golf, no matter what level or ability you play at. It can happen in a social round or a competition, it is equally as special.

At the other end of the spectrum, the golfer who gets so close to a hole-in-one is the most devastated and heartbroken figure on the golf course at that moment.

Unfortunately for one golfer, this was the case and it is about as heartbreaking as you can imagine. We don't know if the man saw his ball land and bounce by the cup, but either way, it will have been an incredible shock when he saw his ball settle.

Somehow, the player's ball has pitched an inch from the hole and has rolled to an inch on the other side of the hole. If anyone could explain how a golf ball is capable of such movement and spin, without falling into the cup in close proximity, then do let us know.

You can only sympathise with the unlucky golfer in what is an absolutely gutwrenching situation for him. Whether he has had a hole-in-one before or he is still yet to achieve one, this moment will surely hurt for a while to come.

"No one talking about that land mine divot," one fan said.

"That was def a hole in 1. The ball ends up there because of that stupid ring inside," one fan commented.

"It woulda went in if it wasn't yellow," another fan said.

"Feel a bit better about my shot yesterday now," another fan commented.

NEXT PAGE: PETER FINCH HITS BACK AT OPEN COMMENTS MADE ON RICK SHIELS PODCAST