This golfer could never have thought this could happen when he took his backswing... 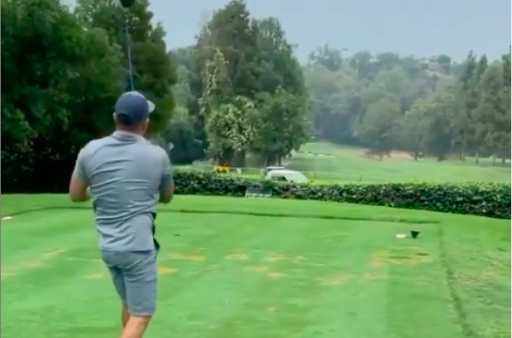 Golf is a fun sport that is enjoyed by thousands upon thousands of people across the world, but sometimes, it can be a dangerous place.

On driving ranges and golf courses, balls can hit anyone with a stroke of bad luck and it is important to keep yourself safe and be as careful as you possibly can.

Unfortunately for one golfer, he nearly did what any player will always avoid doing and that's hitting a person or in this situation, a moving vehicle that was driving through the golf course.

As the man got set to hit his ball, there did not seem to be much trouble and it looked as though all he needed to do was try and find the fairway and move on with his round.

But as he took his downswing, a car approached from his lefthand side and it drove past at the exact moment that he hit his ball. The golfer did not hit his best drive and his ball veered off to the left and hit the car.

He turned round in both horror and embarrassment at what had just happened. We can only hope that no one was hurt after the ball hit the car.

" 'He shouldn't have been standin' there'," one fan said.

"Nobody with a swing like that should be on the course," one fan commented.

"That's one of the worst golf swings I've ever seen," another fan said.