Golf fans react as UNLUCKY GOLFER is hit on the HEAD with a golf ball!

Golf can be a very dangerous sport, so make sure that you shout fore when you hit a wayward shot... 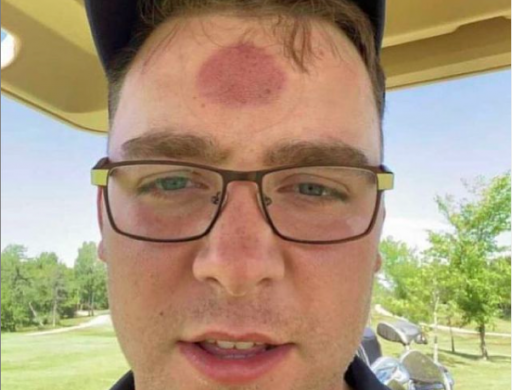 During the US Open, Bryson DeChambeau was criticised by some golf fans when he hit a tee shot towards a crowd of people and failed to shout "fore."

Golf can be a very dangerous sport if golf balls are flying all over the place and golfers are not being informed of it. This can lead to serious accidents that can easily be helped by a simple shout.

A picture was posted on Instagram of an unfortunate golfer who suffered some awful luck on the golf course when he was hit in the middle of the forehead with a golf ball.

Now, we don't know if there was a shout for "fore" or not, but this is evidence of how important it is to let your fellow golfers know that you have hit a bad shot that could cause them harm.

Not only did this man get hit with a ball, but it hit him perfectly in the middle of his forehead and left a large, red mark. Although some golf fans saw the brighter side of the accident, you must admit that it looks like a very painful injury.

RELATED: BRYSON DECHAMBEAU SLAMMED BY GOLF FANS FOR NOT SHOUTING FORE AT US OPEN!

"Nope that's from one of those Suction cups I've been hit before golf balls leave goose eggs," one fan said.

"Hope you won the hole," one fan commented.

"Sometimes the clubhouse is the only safe place," another fan said.

"Whereabouts did it hit him?" another fan commented.

NEXT PAGE: NEW WORLD NO. 1 JON RAHM CREDITS TWO OTHER MAJOR CHAMPIONS AFTER US OPEN WIN