Golf fans react as an UNLUCKY golfer misses out on a HOLE-IN-ONE!

This could be one of the unluckiest shots we have ever seen... 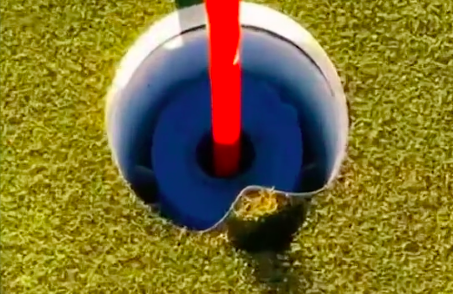 The hole-in-one is arguably the most sought after achievement in golf, whether you are a club golfer or a professional player.

Some people have had multiple aces in their careers and some people have never come close to the glory. No matter how good a shot you hit, you need an abundance of luck for the ball to fall in the hole.

Unfortunately for one golfer, this was definitely not the case. As you can see in the video below, this golfer's ball almost landed straight into the cup, if it had carried another half an inch.

But instead, his ball made a huge dent into the side of the hole and it actually damaged the cup. Another frustrating part of the shot was that his ball finished about 15 feet from the hole, which is not even a guaranteed birdie.

By the look of the pitch mark that the ball made by the hole, it would appear that the shot was struck crisply and with plenty of backspin, but maybe there was too much backspin.

Golf fans left their reactions to the video on social media:

"Yes in a tournament once, I landed the ball in the hole on a par 3, the ball destroyed the hole much like that then ricocheted 10 yards off the green," one fan said.

"A ball denting the cup like that tho! Idk looks like he placed it and stomped it in to look like a divot," one fan commened.

"What’s harder, being robbed of that ace or putting in that demented cup for birdie," another fan said.

"Start the putt at the correct line at the right speed... simple," another fan commented.