Golf rules: What do I do if a MASSIVE kangaroo interferes with my putt?

Golf rules: This kangaroo was hopping around the green in Australia then interfered with a player's putt. What is the ruling? 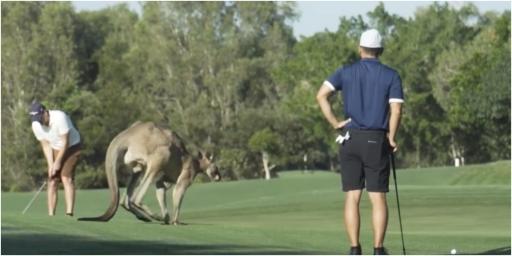 Only in Australia could this happen, a massive kangaroo hopping around the green.

This hilarious video has surfaced, courtesy of the PGA of Australia, showing a player lining up his putt.

The only problem was the kangaroo bouncing around the green. Unfortunately for said player, the kangaroo interferes with the ball.

That putt was definitely dropping and there is absolutely no doubt about that. What a rude animal.

Related: Golfer mobbed by kangaroos on the tee box

Related: Can I use my club to help my alignment?

It does beg the question though, what exactly happens under the rules of golf should you ever be playing down under and this happen to you.

Well, we here at GolfMagic are able to give you a helping hand.

First of all, the stroke must be cancelled and the ball must be replaced and replayed.

The ball is then to be played as it lies under Rule 11.1.

There is no penalty to any player.

This is true even if the ball hits another player, the opponent or any other player or any of their caddies or equipment.

So now you know.