Golf Rules: What was the ruling for this Kevin Na MISHAP in 2011?

In 2011, Kevin Na made headlines for a very strange reason but was he penalised for making this odd swing? 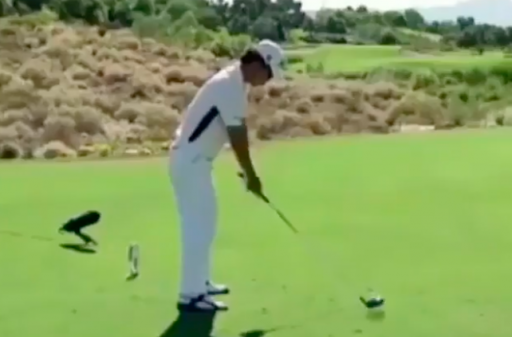 Kevin Na has grown into one of the most consistent players on the PGA Tour and he is a player that doesn't come without his own little quirks and mannerisms.

Most recently, he has made the early walk on the putting green his own. We have seen him begin his route to the hole well before the ball has dropped in, much to the entertainment of live crowds and golf fans at home.

Na has also been the subject of controversy for supposedly playing too slowly during PGA Tour events, but he can join a club of many players who have been criticised for this.

But in 2011, the five-time PGA Tour winner attracted attention again and this time, it brought up a potential rules infringement which you could say is open to interpretation.

In the third round of the Justin Timberlake Shriners Hospitals for Children Open 10 years ago, Na was about to hit his tee shot on the par-4 15th hole.

As he swung down, he hesitated and swung his club over the top of the ball. He missed the ball and stepped away to prepare to take on the shot again.

The PGA Tour reviewed the shot and decided that Na had not completed the stroke or taken a legitimate swing at the ball. Therefore, there was no penalty stroke.

Watching the video for yourself, you can see why the situation is open to interpretation. Should it count as an air-shot? Should he be docked a shot in this scenario?

The 38-year-old went on to win the event, which was his maiden win on the PGA Tour. He finished two shots ahead of Nick Watney.

Na stated at the time that when the transition in his swing doesn't feel right, the only way to stop himself was to swing over the top of the ball.

It seems clear enough that Na deliberately pulls out and the officials ruled that this was a 'check-swing'. The ruling proved to be very beneficial for the eventual winner of the tournament.