GM staff members give their take on golf's hottest topics 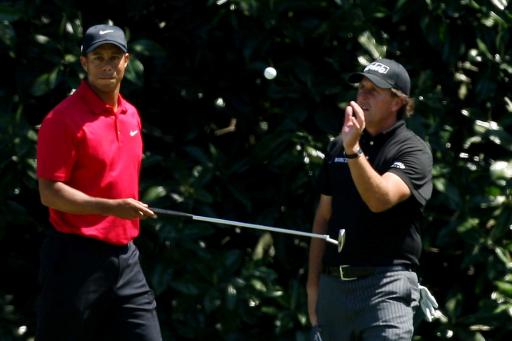 In the first of a new GolfMagic Debates Series, our members of staff discuss some of the hottest topics currently trending in golf.

With precisely one month until the year's first major at Augusta National, we mull over the chances of resurgent duo Tiger Woods and Phil Mickelson at The Masters, as well as contest whether both fan interaction and golf ball distance are really issues on the PGA Tour right now.

We also deliberate whether new formats to Tour events are indeed the way forward to encourage new and younger participation into the sport, and reveal our favourite new golf products of 2018 so far...

TOPIC 1: SHOULD GOLF FANS BE ALLOWED TO OPENLY ROOT AGAINST PLAYERS LIKE IN OTHER SPORTS, OR IS THAT DISRESPECTFUL?

What's the issue? Justin Thomas spoke out against unruly and “completely unacceptable” behavior from PGA Tour fans after the Genesis Open several weeks ago, saying: “I wish people didn’t think it was so amusing to yell and all that stuff while we’re trying to hit shots and play.” A week later at the Honda Classic - which Thomas went on to win in a playoff over Luke List - a golf fan openly rooted for Thomas’ tee shot to go into a bunker on his tee shot at the 16th hole, to which Thomas got the man ejected from the tournament. Some 24 hours later, Thomas apologised on social media for reacting how he did.

Andy Roberts (GolfMagic Editor): It's completely disrepectful to root against another player, but sadly at the end of the day there are a***holes out there who think it's fine to say or do as they please outside the ropes. These guys out here are playing for millions of dollars every week, and any distraction - no matter how small or petty - can affect or alter the result of a tournament. Sometimes you just need to keep irrational thoughts to yourself, no matter how much money you've got riding on the other fella to pay for your upcoming holiday with the Mrs. If you really need to shout out "get in the bunker" to an opposing player, then you probably should just watch the event in your living room. I'm just glad JT got the job done at the end of the day, and likely cost that guy his trip to Barbados! I'm all for creating atmosphere, but there are ways of doing that without launching abuse.