"It gives me an edge": Social media model Bri Teresi on her SWITCH TO GOLF

Bri Teresi has experienced a large increase in followers on social media when she went to the driving range to try golf. 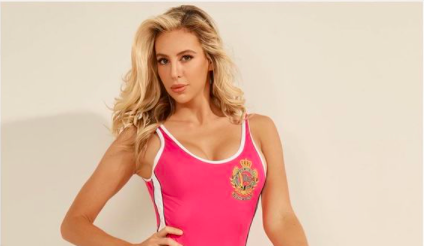 Sometimes, you don't need to put in hours of practice and effort into making a career out of golf and this was discovered by social media model Bri Teresi.

She holds a regular role of being a model on social media and host of the Tag Team Podcast. She has become a popular figure and as she poses in her underwear and other clothing lines.

Earlier in June, her fame in the golf world hugely increased when she went to the driving range dressed in high, black boots with short shorts and a crop top.

This was an outfit chosen by her friend Taylor Funk, who is the son of PGA Tour veteran Fred Funk. Taylor had suggested to her to wear the black boots and it turned out to be a great idea.

"(Taylor) was at my apartment doing laundry because he had a tournament in the area. Then, he was like, ‘You need to wear these boots, trust me'," said Teresi to the New York Post.

"His mom golfs in heels all the time. He picked out my entire outfit, so I wore it.

"I have probably gained 200k-300k followers since and millions of views. It gives me an edge."

Much like the experiences that fellow social media golfer Paige Spiranac has described before, Teresi has been accused of "over sexualizing" women in sports by dressing in revealing attire on the golf course.

However Teresi, who has over one million followers on Instagram, is not phased by this and maintains that her dress code promotes her strength and confidence and there should be no issue with the way that she dresses.

"Women don't have to fit in one box. Me as a woman, I model, play sports, I'm highly educated, and I don't have to be one thing," Teresi added.

"That's what I'm trying to show on social media, that you can be whatever you want to be.

"I think as women, we face being sexualized when we don"t want to be, but the way you carry yourself is important too. For example, I carry myself as a strong woman.

"Yes, I dress sexier, but people usually don't mess with me or mistreat me because I appear to have a strength to me."

NEXT PAGE: ENGLAND GOLF CONFIRMS FLAGSTICKS CAN BE REMOVED FROM JULY 19