There is no doubt the golf world will continue to honour Bryant in ways like this. 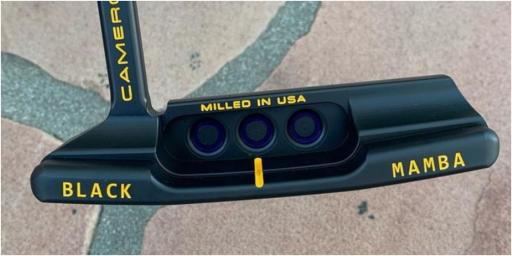 The world of sport stood still when Kobe Bryant died in a helicopter crash with his 13-year-old daughter Gianna last year.

Black Mamba perished with seven others in the January 2020 accident and it sparked an outpouring of grief from all over the world.

Tributes were paid by some of the world's biggest stars, murals were painted where he grew up and it still doesn't seem real to this day.

The folks over at @embraceputters have posted images of a pretty cool Bryant-inspired Scotty Cameron.

RELATED: GOLFER CLAIMS TO HAVE BOUGHT A SCOTTY FOR $1

MORE: BROOKS KOEPKA DIGS DIRT AHEAD OF THE MATCH

Take a look below:

The milled-putter is black with his nickname Black Mamba written on the back in yellow, paying homage to his LA Lakers jersey.

On the face, they have included a list of his best achievements.

The sole of the putter has more, including when he scored 81 points in a single game.

Clearly, they could not fit all of his accomplishments that he racked up throughout his career.

He was the two-time NBA finals MVP and also won the Olympics with the United States twice, amongst others.

Fans reacted with comments such as:

The golf world paid tribute to Bryant after his death.

At the famous 16th hole at the Waste Management Phoenix Open, players wore Bryant's jersey as they took their shots.

Justin Thomas also auctioned off his wedges to raise money for those affected by the tragedy.

MORE: WHAT WOULD YOU CHANGE IN GOLF?