Kyle Berkshire is currently ranked top of the World Long Drive rankings and you can see why. 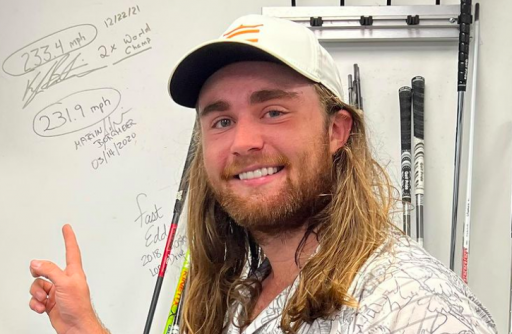 Berkshire, who won the World Long Drive Championship in 2019 and 2021, was posted on the Instagram page of Long Drivers posing in front of his record figure.

During a hitting session with Bryson DeChambeau earlier this month at a Cobra media launch event, Berkshire reached a ball speed of 231.3 mph. The former US Open champion achieved 221.5 mph, a personal best that he was ecstatic with.

But now Berkshire has risen the bar even further and added another 2 mph on to his best. It is no wonder that he is the winner of six World Long Drive events.

DeChambeau, the winner of eight PGA Tour events, has been inspired by the likes of Berkshire and fellow Long Drive competitor Martin Borgmeier.

As a junior golfer, Berkshire earned a scholarship at the University of North Texas. Working with his instructor Bernie Najar, the 25-year-old discovered his colossal speed and began working towards WLDA events in 2017.

Based in Orlando, the world champ uses a Cobra RAD Speed driver and his longest ever drive stands at a staggering 492 yards. He often posts videos of his golfing exploits on his social media pages.

The 2021 World Long Drive Championship was arguably his finest hour. In the open division, Berkshire was pitted against two-time champion Tim Burke and he outdrove him with his second ball.

Berkshire is certainly an athlete who doesn't settle for second best and much like DeChambeau, he is constantly pushing himself to achieve faster ball speeds and longer drives.