Making The Turn: Tiger Woods returns, Olesen is cleared and Korda gets hitched

This is everything you need to know about what happened in the golf world over the last week... 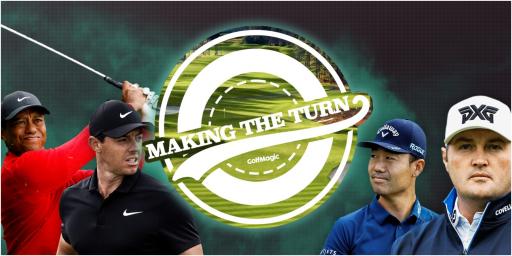 Welcome to Making The Turn, where GolfMagic helpfully rounds up the week in the sport and what you may have missed.

There's no doubting it has been a quiet time on the schedule - it always is - but a few things have happened which have sparked some life into it.

As you can no doubt imagine, Tiger Woods is that spark and he has featured heavily in this week's golf coverage. Millions of golf fans from around the world will tune in to watch the 45-year-old this weekend.

The 15-time major champion is playing in his first professional event - albeit a "hit and giggle" - alongside his son Charlie Woods at the PNC Championship.

Elsewhere, there were wedding bells for one LPGA Tour superstar and one legend of the game - not Woods - was mulling over a comeback.

We shouldn't really be surprised that Woods is playing this week. His comebacks now follow a particular pattern. Silence, followed by a social media post to send the golf world into a frenzy. Then he shows us just how much progress he has been making.

Woods teased the world with a 'making progress' three-second swing video, clipping what looks like a middle iron into the range at Medalist Golf Club in Florida. He and Charlie reportedly had free reign of this course during the pandemic.

Woods was the tournament host of the Hero World Challenge where Viktor Hovland claimed the win. Woods was pictured in his Sunday red and black striping every club on the range.

How good will it be to see him playing golf again, only a mere nine months on from his car crash?

Even the PGA Tour pros are excited.

Danish golfer Thorbjørn Olesen stood trial over his behaviour on board a British Airways flight on his way back from WGC FedEx St. Jude in 2019. Olesen, 31, was cleared by the jury after the they took less than an hour to consider their verdicts. The Dane later released a statement apologising for his behaviour - which he was not in control of - and is now focusing on resuming his career.

This feature we wrote explains the jury's route to verdict.

Jessica Korda, the 28-year-old older sister to Nelly Korda, got hitched at the weekend to partner Johnny DelPrete.

At the wedding were fellow golfers Alison Lee, Sophia Popov, Jodi Ewart and also her brother Sebastian Korda and of course, Nelly. Many people from the sports world sent their congratulations on social media.

Korda and DelPrete reportedly first started dating in 2013 which was two years after her debut season on the LPGA Tour. DelPrete is a former professional golfer who is now an estate agent.

"I've never cried so much in the past month."

Today was an emotional win for @KevinNa915 after he recently lost two very close friends. pic.twitter.com/9XNw8i8qWD

Walk in putt specialist and all round good guy Kevin Na triumphed alongside Jason Kokrak at the QBE Shootout. The "hit and giggle event" was played at Tiburón Golf Club in Naples, Florida. The pair took down more than $400,000 each for the win after making the second largest comeback in the event's 33-year history. Early leaders Jason Day and Marc Leishman fell by the wayside and Na effectively played the final round on his own until Kokrak came up clutch. Na was walking in so many putts his hand was effectively in the cup before they already dropped. He also took the time to LUNGE in one of his putts.

It was an emotional victory for Na. "I lost two good friends of mine in the past month," he said, referring to the death of Kenny Lee, his good friend from Las Vegas, and also Dustin Smith, a childhood friend of his from when he grew up in California, who also caddied for him. "He died of a heart attack and it really hit me. I mean I've never cried so much in the past month."

Living legend of golf Annika Sorenstam is reportedly mulling over the idea of playing in next year's US Women's Open Championship.

But she returned to the game this year, winning the U.S. Senior Women's Open by eight shots at Brooklawn Country Club.

That was after a 13-year break from the game and she earned a spot at the 2022 US Women's Open at Pine Needles in North Carolina.

How good would it be to see her back in action?

Nice to have Rory on the range at Ibis filming for @GOLFPASS @whoop @ClubatIbis @McIlroyRory pic.twitter.com/pOp3n8iamu

Rors has made an equipment change ahead of 2022 where he is hoping to finally end the major drought that goes far back as 2014.

Most recently, the 32-year-old Northern Irishman slumped to an 18th placed finish in a 20-man field at Tiger Woods' Hero World Challenge. McIlroy had made a good start in Albany, Bahamas, but faded.

McIlroy had been using TaylorMade's Milled Grind 2 (MG2) wedges in 54 and 58 degrees, but he has now switched into the company's more recent MG3 models.

He had already been using a 46-degree MG3 wedge prior to the change, so he now has a full artillery of MG3 wedges in his bag to round out the season.

According to TaylorMade, the two-time FedEx Cup champion has opted for high bounce variations in each of his wedges.

Cheers to another year, and popping bottles as a new father! pic.twitter.com/maUTX86Kc8

He recently announced the birth of his daughter Maya.

It seems like only yesterday Fowler burst onto the golf world with his bright outfits.

Head to GolfMagic every Monday to find for your golf fix.