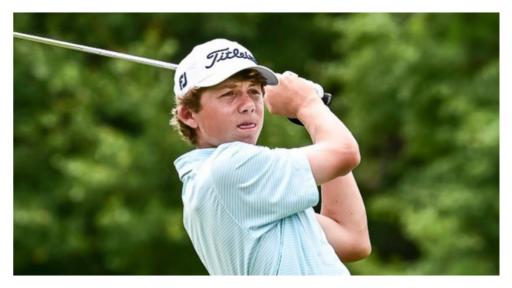 Sargent joins the list of esteemed company that includes Phil Mickelson, Ben Crenshaw and Curtis Strange in winning the title as a first-year student.

The championship went into a playoff and a birdie at the first extra hole saw Sargent beat Eugenio Chacarra, Parker Coody and Ryan Burnett.

Coody, in particular, is a name that you might be familiar with. He hit the headlines earlier in the year when he was involved in a freak accident.

Parker and his twin brother Pierceson both broke their arms in a boat accident. It hurt, of course, but the brothers both found the irony hilarious.

Later this year Parker hit the headlines again when he made not one, but two, hole-in-ones on an U.S. Open qualifier.

The Coodys are the grandchildren of the 1971 Masters champion Charles Coody.

A moment for the ages. #AnchorDown pic.twitter.com/qjelNjMCYc

Sargent, 18, a Vanderbilt student was the 54-hole leader at Grayhawk Golf Club in Scottsdale and sneaked into the playoff despite shooting a 4-over round of 74.

The conditions were tough as none of the players who reached the four-way playoff broke par in the final round.

Coody and Burnett both shot level par, Chacarra a 72 and Gotterup also shot a 74 like the eventual champion.

"It definitely took a lot of patience out there," Sargent told the Golf Channel. "It was playing tough. I just kind of stuck to my game. Just a tough day and I managed expectations well."

Sargent is ranked 14th in the World Amateur Ranking and lived up to his reputation by stiffing his approach for a kick-in birdie in the playoff.

Burnett was the only other player to reach the green in two shots but left himself a 30-footer to try and extend the playoff beyond one hole.

Sargent said that while he was delighted to have won the individual tournament, "we all came here for a national championship team-wise."

He added: "I think you soak it in after this week. Still got work to do."