Parker Coody, grandson of Charles Coody, made two holes-in-one during a Monday qualifier to the U.S. Open. 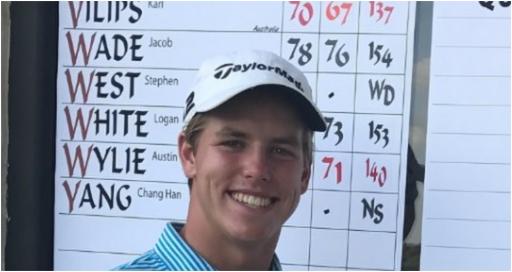 Charles Coody may not be a name that immediately stands out to you.

The Texan, who is now 84 years old, claimed the 1971 Masters with a two-stroke victory over Johnny Miller and the great Jack Nicklaus.

On Monday, his grandson, Parker Coody, pegged it up in a U.S. Open local qualifier.

And the University of Texas senior managed to grab not one, but two holes-in-one during his round at Forest Creek Golf Club in Round Rock Texas.

Parker Coody made two holes-in-one. IN THE SAME ROUND..at his US Open locals.

You can see that Coody made an ace the 190-yard, par-3 eighth and then followed that up with another one at the 17th. That one was from 160 yards.

When he got to the clubhouse, he had signed for a 3-under par 69.

As it turned out, he needed both aces to advance as Coody finished just one shot of having to be in a seven-way playoff.

GolfMagic outlined last year how Parker, and his twin brother Pierceson, grabbed headlines after they both broke a bone in their right arms in a bizarre, non-golf accident.

Still, imagine making two aces in one round. When it matters. Incredible.

When he tells his grandad, we're sure he'll be beaming with pride. But then he'll probably whip out the Green Jacket and trump him.