Harold Varner III was tied for the lead on 10-under-par on the 12th hole at the Charles Schwab Challenge but finished in tied 27th on level-par. 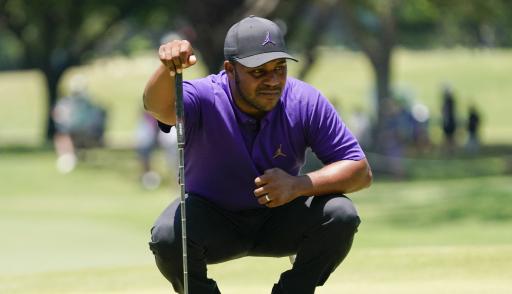 Harold Varner III is still in search of his first win on the PGA Tour after what could've been a successful afternoon at Colonial Country Club quickly became an absolute nightmare.

Standing in the middle of the fairway on the 12th hole in the final round of the Charles Schwab Challenge, Varner III was tied for the lead with Scottie Scheffler and Scott Stallings on 10-under-par.

HV3 found the greenside bunker with his approach shot. He pitched out to about 19 feet and this is where the carnage began as he four-putted for a triple-bogey seven.

He fell back to 7-under-par, but this was only the beginning of the madness. He found the water on the par-3 13th hole and this resulted in a double-bogey. He was now at 5-under-par.

The 31-year-old hit his drive out of bounds on the par-4 14th hole. This incredibly led to another triple-bogey and his chances of winning in Fort Worth had completely disappeared.

Related: Scottie Scheffler on Burns' playoff-winning putt: "He ruined all the fun"

After a tough day on the course, Harold Varner III stayed after to spend time with fans. pic.twitter.com/jKtJdEfm0D

Despite bouncing back with a birdie on 15, he made his second double-bogey on the 17th hole and added a bogey on the 72nd hole to card a 78. He was 10-over-par for his last nine holes.

Varner III, who won the Saudi International in February, has been very consistent on the PGA Tour in 2022. He has made eight top-25s in 16 starts and he has two top-10s in his last four starts.

He handled his Sunday disappointment very well as after his round, he still found the time to sign autographs and greet his fans in Texas.

Earlier in the week, Varner III admitted that "crazy s*** can happen" when you're in contention as he learned in the Middle East. He holed a 90-foot put to win the Saudi event sanctioned by the Asian Tour.

Next Page: Looking back, Steven Alkers's Senior US PGA win is inexplicable