Billy Horschel believes the tournament officials who set up the impossible pin position in this viral clip need to be banned. 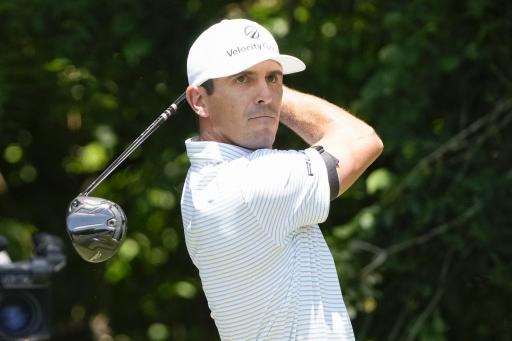 Over the weekend, a video clip of a girls' high school golf competition in the United States went viral. Billy Horschel has seen it and he is not happy. Not one bit.

It was a moment that reminded us of Phil Mickelson's mad five minutes at the 2018 U.S. Open at Shinnecock Hills when he hit his moving golf ball on the putting green.

Lefty later said it was one of the greatest regrets of his extraordinary career.

Still, back then golf fans absolutely ripped the USGA for setting up the course like that. It was rightly condemned as an absolute farce.

And it appears that everyone is in agreement that the tournament officials got this latest one wrong.

These golfers would have been forgiven for wanting to take a leaf out of Mickelson's book and stop their golf balls on this surface.

If you haven't seen the clip from the two-day event at River Valley Golf Course, Iowa, we urge you to check it out below.

Today at the Girls 3A State Golf Tournament at The River Valley Golf Course in Adel, the average score on hole 18 was a quadruple bogey.

No, the golfers weren't bad, but this had to have been the most unfair pin placement I've ever seen. This slope gave the athletes no chance. pic.twitter.com/F7OyqIjbkO

It really is the stuff of nightmares and there were players making 10s and 11s on the hole. The scoring average was a quadruple bogey.

The hole is a par-4 and on the club's website it states that the 18th is: "Probably one of the most notorious holes on the golf course! The green rises almost 100 feet above the tee box. The finishing hole is straight away up hill.

Fair enough, then. So what happens if you have trouble with the golf ball anywhere on the green?

Horschel ripped the tournament officials a new one on his Instagram stories: "Feel bad for these girls!

"Absolute joke by these officials to embarrass these young ladies.

"These officials should be banned from setting up a course in the future. This isn't a accident … they knew what they were doing when they set up that hole location.

"I bet these young ladies handled it better than I would!"