Jon Rahm joked he wants a head start when he pegs it up at the Memorial this week after he was forced to withdraw last year. 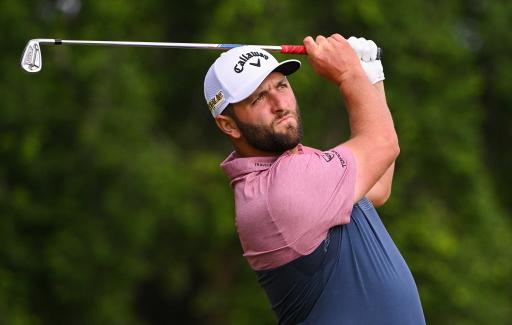 Jon Rahm has joked he wants to have at least a "six shot" head start for the forthcoming Memorial.

In case you forgot, this week sees former World No.1 Rahm return to Muirfield Village on the PGA Tour a year after he was forced to withdraw from Jack's tournament after 54-holes.

A positive COVID-19 diagnosis meant that Rahm had to leave early and it was a crushing blow for the Spaniard as he had managed to forge himself a six-shot lead with some stellar golf.

Rahm, memorably, looked visibly crushed and held his head in his hands before he dejectedly walked off the 18th green to self-isolate after being given a face mask.

At least Rahm can laugh (sort of) about it now. And in his mind, he's already a two-time winner of the tournament.

Rahm joked to GolfDigest this week shouldn't be the only tournament on the PGA Tour Schedule that begins with a stroke advantage.

When he pegs it up at Muirfield Village, he'd be massively in favour of a similar format to that of the Tour Championship after what happened.

"The way I played there the last two years it should be at least six. Maybe more," he joked.

Last year Rahm had played his third round in 8-under par. That Saturday afternoon 64 in the sunshine gave him the largest 54-hole lead ever in that tournament and a scoring record of 198 after reaching 18-under par.

Jack Nicklaus later said he wished he could give Rahm "three quarters of a trophy".

In the end, Patrick Cantlay won the tournament via a playoff. Rahm later captured the U.S. Open - his maiden major - two weeks later at Torrey Pines.

He told the publication: "It's hard to say that it [Memorial] was maybe the best I've played. I mean, the U.S. Open was really good, right?

"But, sure, I played some amazing golf that week at Muirfield Village. The hole looked like a bucket.

"Basically, I felt like anytime I was on the green, that ball was going in, and the ball striking was also unbelievable. So yeah, it's gonna be tough to top those three days of golf."

He added: "What can I say? It was the world we lived in at the time.

"Luckily everybody was healthy, and I didn't have any problems, which is the way we should look at it.

"But in my mind, I have two wins there already."