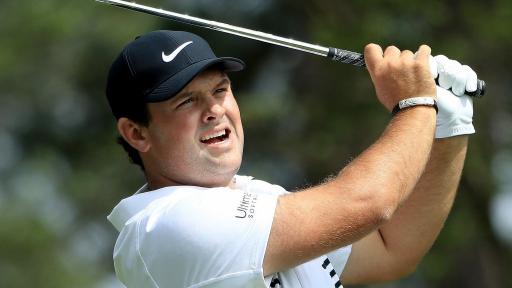 Patrick Reed has blamed a misleading camera angle as the sole reason for his two-stroke penalty in the waste bunker, despite a huge number of golf fans and critics claiming it was "blatant cheating".

Reed's ball found its way into a waste bunker on the 11th hole, but despite being in the sand he was still able to ground his club. Only what he was not allowed to do was take two practice swings and improve his lie in the process, which is exactly what he was penalised for by PGA Tour rules officials after his round.

Reed was docked two strokes for improving his lie in the sand, but not until he had a discussion with PGA Tour rules official Slugger White.

The former Masters champion signed for a 2-over 74 instead of a 72 to lie 10-under par and three strokes behind 54-hole leader Gary Woodland.

"It's unfortunate because even though they weren't, I wish [the cameras] were actually directly on the side of me, because it was in a pretty good footprint but the footprint was a full footprint," said Reed.

"I felt like, I mean, my club was that far behind the ball when I was actually taking the practice stroke, which I felt like I was taking it up and it was, obviously, it was like hitting a little sand.

"I didn't feel it drag, but then whenever you do that, if it does hit the sand, just like if you're in a hazard area, and you take a practice swing and it brushes grass and the grass breaks, it's a penalty.

"Whenever they brought it up to me and I saw it, it definitely did drag some of the sand. Because of that, it's considered a two-stroke penalty.

"I didn't feel like it really would have affected my lie, I mean every time I get in the bunker I'm scared to even get my club close to it, it was that far away, but whenever you do that if it does hit the sand, just like if you're in a hazard area and you take a practice swing and it brushes grass and the grass breaks, it's a penalty.

"So because of that and after seeing the video, I accept that, and it wasn't because of any intent, I thought I was far enough away."

Reed then claimed had there been a different camera angle on the NBC broadcast, then the ruling may have been somewhat different.

"I think with a different camera angle they would have realised that if it was from the side you would have seen that with the backswing it was not improving the lie because it was far enough away from the golf ball," said Reed.

"But after seeing that camera angle, because it brushed the sand it was a penalty."

Some people might feel inclined to give Reed the benefit of doubt in his reasonsings, but that becomes difficult when you remember he did something very similar in the same tournament four years ago.

Check this video footage out of Reed swiping away some sand behind his ball in 2015...

For all you rules gurus out there... What is Patrick Reed doing here in the waste bunker? #WhatsTheRule? pic.twitter.com/XES2KY6XaD

The pgatour Rule officials explained to us Patrick Reed rule violation during round 3 #HeroWorldChallenge pic.twitter.com/aKtJzFRwv5

"He could not have been more of a gentleman," said PGA Tour rules official Slugger White of the Reed incident.

"He was unbelievable. He was at a different look, the angle we had was behind and he was looking from on top. I don't know if he could have seen it as clear as we did, but he could not have been a better gentleman.

"You could see when the club got behind the ball closer, you could see the path of the sand come away in two different occasions."

When questioned as to whether Reed had intentionally swiped away sand on purpose, White was quick to explain it did not matter in this scenario.

"He did not ask about it, and intent would not matter here. It was not in the mix."

Here's a video of what Reed had to say to the media...