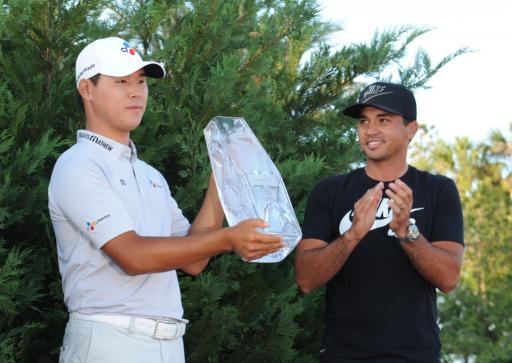 Si Woo Kim may have just announced his name on the world stage by winning the Players Championship, but that could be the last we'll hear from him in a while.

Kim, who landed his second PGA Tour title with a commanding three-shot victory at TPC Sawgrass on Sunday, became just the fourth player under the age off 22 to win on the circuit.

He also became the youngest player to win the tournament, considered by many as the "unofficial fifth major."

But hailing from South Korea, Kim is now expected to serve a minimum of 21 months for the country's military.

"Regardless of me winning this tournament, I really have to go to the military service and I've already decided that I'm going to go, too. So I'm ready for that," said Kim.

Military services is mandatory for South Korean males between the ages of 18 and 35.

The country does hold exemptions for athletes but Kim, unfortunately, will not fall under the terms needed to avoid military service.

Fellow South Korean golfer Sang Moon Bae is currently serving in the military after a court ruled against his case to avoid conscription to continue playing on the PGA Tour.

Fellow South Korean golfer and two-time PGA Tour winner Bae Sang-Moon, 30, is currently serving in the military after a court ruled against his case to avoid conscription to continue playing on tour.

Golf Tips: How to stop slicing | GolfMagic.com by GolfMagic

Kim has already pulled out of this week's Byron Nelson tournament after picking up a niggling back injury, just like Rory McIlroy.

FEATURE: HOW TO BANISH BACK PAIN IN GOLF

"On Saturday night at The Players, my back began to flare up," said Kim.

"On Sunday when I arrived, I received treatment from a physio on the putting green that helped me get through the round, and fortunately, win the tournament. Having dealt with that the last two days, I feel it is best for me to take precautionary measures to ensure I can play and compete fully healthy for the rest of the season."

PGA Tour
Si Woo Kim makes a THIRTEEN on a par-3 at WGC-FedEx St Jude Invitational
US PGA
Jon Rahm would take "BRIBE" from Sungjae Im if military service is on the line
PGA Tour
Si Woo Kim must pay $100,000 if he SNAPS another golf club!
PGA Tour
Golf fans react as Si Woo Kim is DENIED a birdie by rules official
The Masters
Si Woo Kim SNAPS HIS PUTTER on day two at The Masters!