Adam Sandler and Chris McDonald both said they would love to make Happy Gilmore 2, but not everyone is convinced on the idea. 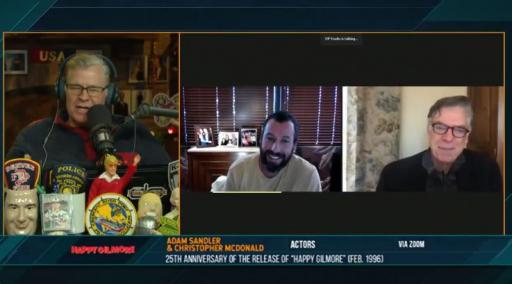 Golf fans have reacted to the news that there could potentially be a sequel to the iconic Happy Gilmore movie, which would see Happy Gilmore and Shooter McGavin come up against each other on the senior tour.

Adam Sandler and Chris McDonald both appeared on the Golf Channel's 'The Dan Patrick Show' where they were asked if Happy Gilmore 2 was something that had already been discussed.

"That has not been discussed but it's certainly been discussed on the internet," said Sandler, before both Hollywood stars agreed it would be something they would love to be a part of.

WATCH THE POSSIBILITY OF HAPPY GILMORE 2 COME TO LIFE BELOW:

The original film, which came out 25 years ago, is one of Sandler's most successful of all time and the idea of going up against Shooter once again but on the senior tour was something that McDonald loved the sound of.

"I am double in, yes," said McDonald. "Everyone has been screaming for it like Adam said on the internet. I just gotta say it would be a complete blast. The senior tour with us two... oh my god."

Although many fans have been calling out for a sequal to the movie that every golf-lover has seen, not everyone is convinced that it's a good idea and people took to social media to share their views.

"Don't think this is a good idea, would be the same as the first one."

"This would be amazing!"

"Sequel are usually bad after so long but that movie was made with such a small budget, I would like to see a new one with today's technology."