Solheim Cup 2021: TEAM USA PLAYER PROFILES ahead of their clash with Europe

Nelly Korda, Lexi Thompson and Danielle Kang - get to know Team USA at the Solheim Cup 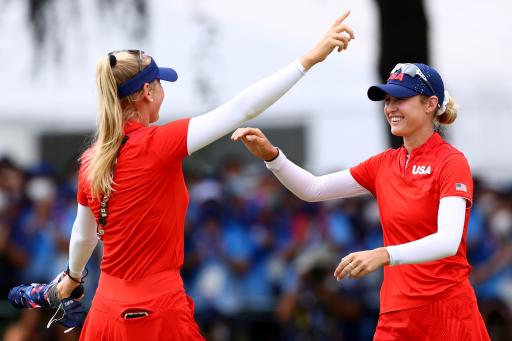 The 2021 Solheim Cup will be decided this weekend at Inverness Club in Toledo, Ohio, United States.

Team Europe will be spearheaded by Catriona Matthew, who is hoping to make it back-to-back wins following their epic 2019 victory.

The Americans will be captained by Pat Hurst, who has made five appearances at the Solheim Cup.

The best player in the world. Korda seems to be comfortably better than her peers when she's on song.

She followed up her Olympic gold medal by winning her first major at the KPMG Women's PGA.

She'll team up with her sister Jessica, having previously won both of their two foursomes matches.

A five-time champion on the LPGA, including winning her first major in 2017.

She's mentored by hall-of-famer Butch Harmon and she credits him for helping her with her mind as much as her swing.

She'll thrive in matchplay and the home advantage.

Made her debut appearance two years ago when Stacy Lewis pulled out injured.

Her career has gone from strength-to-strength over the past two seasons.

She won the LPGA Drive On Championship at Reynolds Lake Oconee last winter and the Bank of Hope Match-Play, beating Sophia Popov.

She shot a final day 8-under 63 to beat Sweden's Anna Nordqvist by two strokes.

Already a veteran of the Solheim Cup and not even 30 years old.

Thompson will have to take a lot of responsibility on her shoulders for Team USA.

She went without a point in 2019, but reportedly was suffering from a back injury in her singles match.

Thompson will want to banish those demons.

A popular figure who will have no problem encouraging a raucous croud.

A powerful player who has admitted her sister is better than her.

No doubt they will be paired together again.

She won twice with her sister last time out, won her singles match and halved the other.

Didn't get a point in 2019, but has since improved her game considerably.

She claimed her best finish in a major, a T-4 at the U.S. Women's Open.

Khang is known for her accuracy of the tee, hitting 79.2 per cent of fairways this season.

Salas is the eldest member of the team and perhaps the most experienced without a major.

She finished runner-up in two majors this season, first at KPMG Women's PGA Championship and then at the AIG Women's Open.

Without a win on the LPGA Tour since turning professional in 2019, she has finished in the top 10 on nine occassions.

This season, she hit 75.76 per cent of greens in regulation with an average of 1.83 putts per green.

Her only professional victory came at the Symetra Tour in 2016.

A rookie with a string of impressive results under her belt.

She finished fourth at the 2021 AIG Women's Open.

She caught the eye of captain Hurst when she won tournaments on the Cactus Tour by huge margins.

She joined the LPGA Tour in 2010, but this is her first Solheim Cup.

Noh smashes it off the tee, averaging 265.5 yards on the LPGA Tour this season.

In 2021, she finished in the top 15 in three majors: the KPMG Women’s PGA, the Amundi Evian, and the AIG Women’s Open.

Noh is poised to make a huge impact this weekend.

NEXT PAGE: HOW TO WATCH THE SOLHEIM CUP 2021