This absolute hero managed to get out of the bunker and eventually sign for a 10. But he had his playing partner in hysterics. 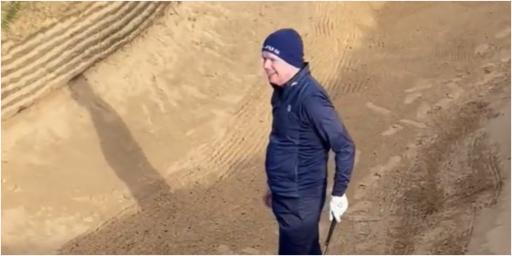 This player had a nightmare at Royal Liverpool's new par-3 15th.

It will be the scene of next year's Open Championship so let's hope the game's elite can manoeuvre this bunker better than our protaganist.

Disclaimer: we absolutely love this. Everything about it. The player, named Dave, takes it all in his stride.

By the time he's finished, he reportedly needed two putts to make a 10.

His buddy apparently scored better. That's after he picked himself up from the floor.

I mean this is absolute comedy gold. Well done Dave for taking this in jest. Be more like Dave.

What's amazing is that his playing partner had the foresight to capture this moment on camera. Absolute bedlam.

This is quite something, the narrator says over the video.

"I could be here a while," Dave says.

Dave gets to the point where he finally takes his medicine and hits the ball backwards to get better lie.

Then he finally gets the ball out. What an absolute hero.

How many was that, he asks.

"I don't know, I better check my phone."

AND THE THRILLING FINALE

The grand finale “how many was that Daniel?” “I don’t know i better check my phone” pic.twitter.com/7686tWNmDN