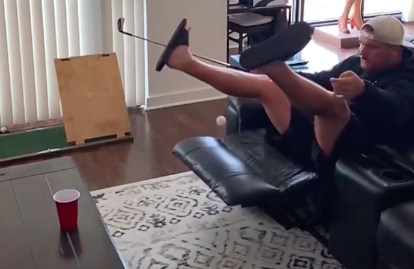 You can't beat watching a great trick shot that has been posted on social media, especially one that is equally as bizarre as it is impressive.

Maybe Ryan Rustand thought of doing this trick shot while being sat on his reclining sofa. The idea sparked and he simply had to emulate what he found in his imagination.

The left-handed golfer had a wooden board leaned up against his wall and a cup on his table. You would assume that all he will attempt is to hit the ball off the board and bounce it into the cup.

But you would be wrong because this golfer has far more creativity than that. The lefty hit his ball against the board and then immediately sat back in his seat.

The footrest of his recliner popped out from below the sofa and the ball landed on top of it. This was the twist that no one could have expected.

The ball rebounded off the footrest and perfectly into the red cup. The slow-motion video of the trick shot is very satisfying as the ball drops out of sight.

Rustand is understandably ecstatic presumably because it would have taken him a fair few attempts to complete this trick shot.

It is one of the most difficult trick shots we have seen as well. The man has to react very quickly to sit back on his chair and bring up the reclining footrest.

The trick shot may have ignited Rustand's imagination even more and he could be thinking of more ways to integrate furniture into his next activity.