WATCH: This golfer will be more careful next time at the driving range...

When you go to the driving range, you should always make sure that no one is walking near you while you are taking your shots. 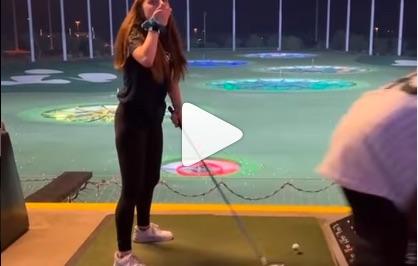 The driving range is often a very busy place where many golfers like to go to work on their game and iron out any issues from their last round.

Top Golf is also a popular activity to do with friends and family which includes aiming for different targets and flags down the fairway.

But with so many people walking by and passing near your bay, it is important to check if anyone is near you before taking your swing.

Golf clubs are very powerful and hard objects and a clubhead to the wrong part of the body could result in a serious injury or a painful bruise.

Related: Final round of The Masters was most-watched golf telecast since 2019 tournament

This almost happened in the footage above as a girl prepared to take aim at the driving range which appears to be one of the popular Top Golf venues.

It looks as though her boyfriend is filming her and after she looks into the camera, she looks down at her ball and she is ready to play.

But as she swings back, a man walks past right next to her bay and it proved to be far too close for comfort. The man had crossed the safety line and put himself in danger

The driver appeared to connect with his right leg and when the club made contact with him, he bent over in anguish and pain.

It is unclear whether the man was seriously hurt by the accident. We can only hope he didn't sustain a serious injury.

Next Page: Joe LaCava on Tiger Woods return: "I can see him winning again"