The windmill is the enemy of many a mini-golfer, but this girl mastered the shot in Happy Gilmore style... 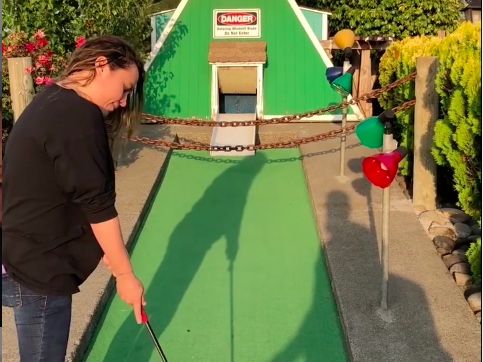 When you go for a round of mini-golf, at some point you will encounter a giant windmill that will do its best to annoy you and ruin your round.

You will often have to try and thread your ball through a tiny gap, while the long arms of the windmill will attempt to swat your ball away from the gap.

I know I speak for many people when I say that it can become infuriating when this happens, but maybe we should take a leaf out of this girl's book in the video below.

To her and her playing partner's amazement, the ball was now rolling near the hole and unbelievably, the ball dropped into the cup to the girl's delight.

Both the cameraman and the girl laughed after the ball dropped in. The route that the ball took is reminiscent of some of the shots that Happy Gilmore played when Chubbs took him to an adventure golf course in the cult film.

"Plot twist: that was the mission," one fan said.

"Happy Gilmore, go to your happy place," one fan commented.

"Luckier than my dad!" another fan commented.

"Like something out of Happy Gilmore, imagined her happy place," one fan said.