Carl Yuan is on course to earn his card for the PGA Tour in 2023, so we thought we'd introduce you to his weird and wonderful swing. 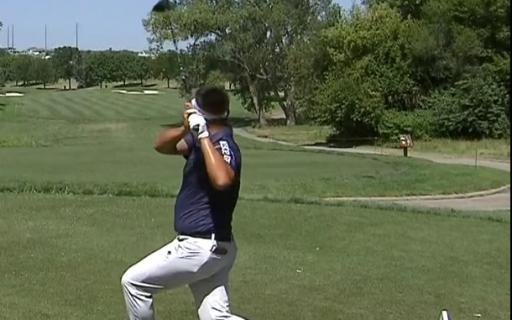 It is the week of the Pinnacle Bank Championship on the Korn Ferry Tour, the regular season-ending finale to see which 25 players earn their card for the PGA Tour in 2023.

Although Philip Knowles is leading the way after round one at The Club at Indian Creek outside Omaha, Carl Yuan is projected to finish top of the season-long points list.

Yuan shot an opening score of 4-under-par, with a double-bogey on the final hole, to sit two shots behind Knowles. The man from China is currently maintaining his place at the top of The 25 ahead of Paul Haley II and Zecheng Dou.

In the same week as the best players on the PGA Tour are tussling for places in the FedEx Cup standings, Yuan is aiming to secure his first ever card on the Tour.

Too good not to compile all of Carl Yuan's unique swings @PinnBankGolf. pic.twitter.com/8ZTpm1dFaU

As well as bringing depth and quality to the circuit, the 25-year-old will also bring a unique and quite frankly strange swing to proceedings, a swing that could make him quite the attraction.

As you can see by the footage above, Yuan performs similar follow-throughs and actions to that of previous fan favourite Ho-Sung Choi, a player who made after-shot antics his trademark.

It appears that Yuan is trying to make the one-arm follow-through his trademark, but with one win and three runner-up finishes on the Korn Ferry Tour in 2022, it's hard to criticise.

Yuan won the Chitimacha Louisiana Open back in March which was his first win on the tour since joining in 2019. He has earned just over $400,000 this season.

As players battle it out to reach the pinnacle of the game at the Pinnacle Bank Championship, there will be both jubilation and heartache on Sunday afternoon as 25 players will realise their PGA Tour dreams.