WATCH: Round of golf is interrupted by a WEDDING ceremony!

Wedding ceremony takes place down the right side of a hole as play continues. 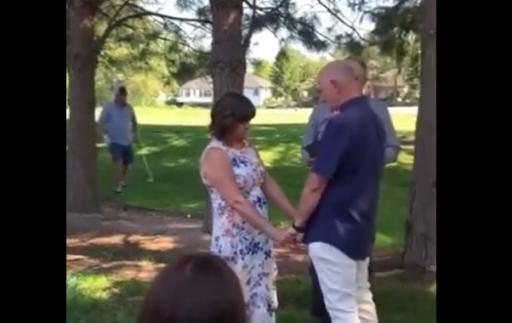 A video of a wedding ceremony down the right flank of a hole in the United States has gone viral this week, and golf fans have been reacting to the hilarious footage.

The funny video sees a golfer go to retrieve his ball in the rough some 20 yards behind where the wedding ceremony is taking place by the trees down the right side of the hole.

You can hear stifles of laughter in the gallery as a left-hander pitches his ball back into play while a golf cart whizzes down the fairway on the other side.

As far as we can tell, it was not Phil Mickelson, but this has yet to be confirmed.

"My moms wedding," reads the caption to the video followed by a laughter emoji.

The video was posted via IG/ballardckb and then shared on Twitter/rockbottomgolf.

So rude, interrupting a round of golf with a wedding

"Who gets married in the rough?!" said one golf fan.

Another commented: "His first time with a gallery. I totally would have taken advantge of my only time as well. Nicely done golfer."

"Play it as it lies," said one golfer.

"It's all downhill from there... and so was his shot," joked another.

Next Page: Richard Bland confirms he WILL PLAY in the first LIV Golf Invitational Series event at Centurion Club - "If I get banned, I get banned"