With Mark Mouland and Peter Shilton 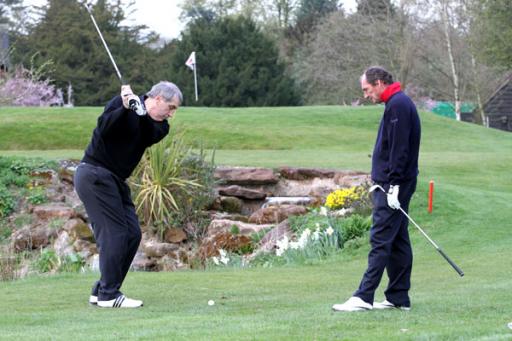 As England's most capped footballer, former Leicester, Stoke and Nottingham Forest goalkeeper Peter Shilton is a legend. But he admits he still has much to learn when it comes to golf.

So we offered him the chance of a series of lessons with former Welsh World Cup golfer Mark Mouland at Nailcote Hall near Coventry which stages the Farmfoords British Par-3 Championship from August 10-13, when Peter will also be playing the pro-am.

Lob shot from 50 yards over a hazard

Says Mark Mouland: "It's probably one of the most demanding shots in golf but with practice your confidence will build and you'll find it's a great shot to have in your armoury.

"You need a few things to be in your favour before you even think about playing this type of shot - a  pretty decent lie and a little bit of an upslope helps. If it's on a downslope, forget it. Similarly, if the ball is on hardpan or sitting in a slight depression you have to adjust your thinking to maybe playing a regular chip shot and take your chances on holing 10 or 15-footer.

The club: Ideally a 58 or 60-degree lob wedge built for the purpose with very little bounce built into the sole.

"A wedge with too much bounce tends to get stuck in the grass and the leading edge hits the ball on the equator," he says.

The execution: "It's a bit like a bunker shot, so aim the line of your feet left of the target with the clubface on line to the flag. Narrow the stance a little, keep 60 per-cent of weight on your left and keep the back of left hand and blade of club square to target. It's a hands and arms shot, with little body movement.

Remember: "Too much weight on the right side and trying to help it up in the air will cause you hit on top of the ball or hit it 'fat.' Play a hands and arms shot with weight favouring the left side.  Keep the clubhead and left hand in charge but remember, the hands need to work together.

Says Shilton: "It's all about confidence and not thinking too hard technically about the shot. When you're a professional sportsman you tend to work everything out, technically-wise knowing there's a right and a wrong way to do it whether it's cross or close shots and balls bouncing in front of you there's a way of getting your body in the right position.

"With golf I've got to learn the technicalities in practice and then just relax, play and let it happen."