Magnificent Seven tips from the stars

Top players teach you how to improve 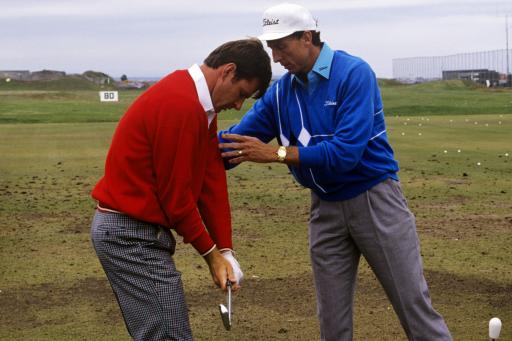 During my many years in the golf business, I've had the privilege to have worked with some of the game's top players.

Many of them have helped my own game and most of their tips have stuck in the memory.

Here's my selection of the magnificent seven that have either been given to me personally or which I have commissioned.

I hope they will help your game, just as they have helped mine.

"But I have always been able to move the ball in the air; to manoeuvre it; shape it.

"It’s a good shot to have because it can get you out of many difficult situations when you are in trouble. It has also helped me when my driver is not behaving.

"From behind a tree on the left, to hit the ball from right to left, make sure you pick a spot on the fairway to line-up you body. At address, slightly close the face of the club to aim where you want the ball to finish and re-grip (don’t just turn the hands). Now swing smoothly down the line of your shoulders and allow for the ball to roll because of the top spin you are putting on it.

"If you want to put cut shape on the ball (so it curves from left to right), aim the feet and shoulders at a point on the fairway and open the club face (take one with less loft than the distance you want to travel) at the finishing target. Swing down the line of your feet and it should curve to the right."

"The finesse bunker shot is one of my favourites, where the ball floats out to a pin quite close to you and spins quickly to a stop.

"It looks great when it comes off and can save you a lot of shots when your approaches are off target, believe me.

"Take a good firm stance in the bunker, working your feet into the sand and aiming your feet about two yards left of the pin.

"The secret is to open the blade of your sand-iron, then re-grip, imagining there’s a champagne glass balanced on its face.

You have to swing the club back, under the ball on a cushion of sand and through to a high follow through without spilling a drop."

"One of the best tips I was given as I was moving up through the amateur ranks, was to narrow the focus of my target.

"As amateurs starting the game and with an approach to the green, chances are you will think finding anywhere on the putting surface will do. It’s not good enough. Think ‘flagstick’ or a point on the green where you know you face the easiest putt.

"Even at amateur level from the tee, it’s good to pick out a spot in the far distance, a tree trunk, a telegraph pole, a window, rather than just a general area. Keep the target small."

4. Zero in on a dimple - by Peter Senior

"There’s usually too much movement in an amateur golfer’s swing so my tip would be to zero in with your focus on one dimple on the ball instead of merely the ball itself.

"Keep it there from start to finish throughout your swing. Keeping your eyes rivetted to one dimple will keep you more concentrated."

5. Mind on the job - by Warren Bennett

"Focus, concentration and zone are three figures of speech often heard around the pro game. But how does an amateur achieve them?

"To be honest, I don’t think any of us will achieve it for more than an hour or two at a time, otherwise we'd be in a trance!

"But there’s no reason we can’t all retain our concentration and focus. Simply, when you’re out on the course, don’t worry about anyone else’s game; keep your mind on the job."

6. Pull down to hit it further - says Ian Woosnam

"The key to gaining extra distance with your drives is at the start of the downswing.

"Everyone can keep their head still, take the club back with a wider arc and get a good shoulder turn…the secret is then to pull down as hard as you can with your left hand.

"Too many amateurs let the right hand play too much of an active role in the downswing, which forces the right shoulder out of line and tends to bring the clubhead down from right to left across the ball, resulting in a slice.

"Pulling down with the left hand helps keep my swing path travelling slightly from the inside and makes sure my upper body doesn’t get ahead at impact. It also helps start my weight moving back on to my left side."

"Even from a concrete paving slab (to simulate a hard-pan lie), the flop shot should be a piece of cake. With the right tools and technique, from grass around the green, it should be a doddle to get it close to the hole.

"The 60-degree lob wedge is the ideal weapon but a standard pitching wedge even with much less loft will do the trick almost equally as well, especially out of a lush lie. The only difference is that the face may have to be laid more open to increase the loft and elevation.

"Open the stance, to face slightly left of target, with feet about a foot apart, ball positioned off the left heel. I set my wrist angle with my arms hanging low then simply swing through with the arms and hopefully gain maximum elevation.

"My swing-thought is to swing along the line of my feet and be positive."

Have you been given a tip by a top player? Why not pass it on by logging on to The Forum