Brandel Chamblee's war of words with LIV Golf's Greg Norman shows no signs of abating after the Australian claimed he was "a paid talking bobblehead". 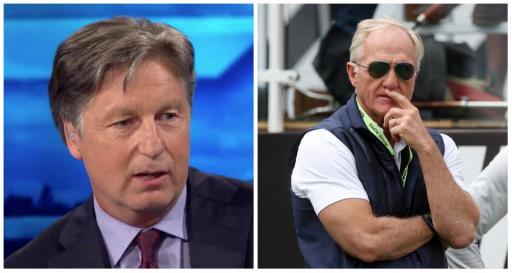 The emergence of LIV means there is currently a battle for professional golf but the war of words between opinionated figures Brandel Chamblee and Greg Norman shows no signs of abating.

If you didn't know, former PGA Tour pro Chamblee is the Golf Channel's lead analyst and has been critical of the Saudi-funded series over the last few years.

Norman, of course, is the chief executive of LIV Golf Investments and apart from "brainwashed" Rory McIlroy he is another one of the Australian's frequent targets.

To bring you into the picture a bit more, Chamblee has called for Phil Mickelson to be removed from the World Golf Hall of Fame, claimed the LIV signees "make me wanna puke" and suggested the first day of the series' inaugural event at Centurion Club was "one of the saddest days in professional golf".

"Watching these players come together for money and show to the world…they are showing us that they are the greediest, most self serving, self interesting, wilfully blind players in the world of golf today," he previously said.

“I find it laughable. Has Brandel Chamblee ever been to Saudi Arabia? Has he ever built a golf course in a third world country? He's a paid talking bobblehead. That's all he is.

He's got my phone number. He's never picked up a phone and asked me a question. Sadly, you're making yourself look like a jerk. It's like water off a duck's back to me.”

Now Chamblee has shared this screenshot of a text message exchange he has apparently previously had with Norman:

Greg Norman *to* Brandel Chamblee before I knew he was being paid by the murderous Saudi regime to sportswash. Funny how when I “call it like I see it” about LIV, it’s not so refreshing to Greg. https://t.co/DFSU5gXSQH pic.twitter.com/xm5Z3OGlHP

"Keep being you and call it the way you see. Refreshing," Norman apparently sent Chamblee.

Chamblee's text above the screenshot said: "Greg Norman *to* Brandel Chamblee before I knew he was being paid by the murderous Saudi regime to sportswash. Funny how when I 'call it like I see it' about LIV, it's not so refreshing to Greg."

The back-and-forth between Chamblee and Norman comes in a frantic week in the golf world after Henrik Stenson was stripped of the Ryder Cup captaincy after becoming the latest LIV Golf signee.