Bryson DeChambeau has been let go by one of his major sponsors after declaring he's playing in the second LIV Golf event. 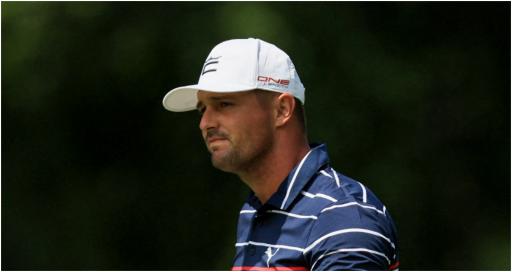 Barely a week ago Bryson DeChambeau admitted he felt like it was too risky to jump the PGA Tour ship.

Now it appears that it is a chance DeChambeau is willing to take, but it comes with ramifications.

Rocket Mortgage has formally cut ties with the 28-year-old former U.S. Open champion after he jumped over to LIV Golf.

In a press release issued on the first day of the richest tournament in the history of golf, the company cited its relationship with the PGA Tour as the driving force behind the decision.

"Rocket Mortgage has been a long-time supporter of the PGA Tour, both through our role as an official partner and as a tournament host," a spokesman said.

"The Rocket Mortgage Classic has quickly become a fixture on the Tour, with players coming to Detroit to compete, while also raising crucial funds to help bridge the digital divide in our city.

"Our partnership with the PGA Tour extends to include several prominent golfers, including Bryson DeChambeau, as ambassadors of the Rocket Mortgage brand.

"As has been widely reported, Bryson elected to join the LIV Golf Series. Effective immediately, Rocket Mortgage has ended its sponsorship agreement with Bryson.

"We wish him well in his future success."

DeChambeau won the Rocket Mortgage Classic in 2020 and has been with the company ever since, serving as a brand ambassador.

Rocket Mortgage join other sponsors in distancing themselves from players who have also decided to play LIV Golf.

When DeChambeau won the Rocket Mortgage Classic, it was overshadowed by him splitting up with his long time caddie Tim Tucker.

DeChambeau refused to speak with the media that week.

The PGA Tour yesterday issued a memo to its membership declaring that all current and future LIV Golf players will be suspended.

LIV Golf hit back, saying the move was "vindictive" and said the decision was "not the last word" on the subject.

What DeChambeau said at the Memorial...

"There's obviously a lot of conversation.

"For me, I personally don't think that at this point in time I'm in a place in my career where I can risk things like that.

"I'm loyal to my family that I've created around me with sponsors and everything.

"And as of right now, the golf world is probably going to change in some capacity.

"I don't know what that is. Not my job to do so. I'm just going to keep playing professional golf and enjoy it wherever it takes me, play with the best players in the world.

"That's really all I've got, that's what I'll do for the rest of my life, because I want to be one of the best players in the world."