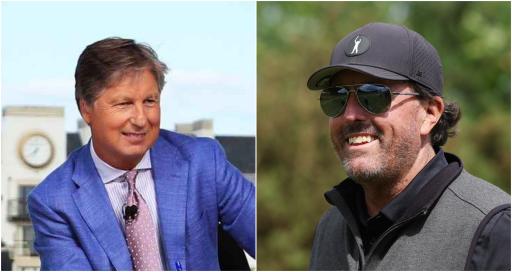 US golf analyst Brandel Chamblee did not hold back after a chaotic opening day in golf at the LIV Golf Invitational Series.

Former PGA Tour player Brandel Chamblee, 59, has always been outspoken on the topic of Saudi money coming into the game.

And he joined Sky Sports after watching players like Phil Mickelson and Dustin Johnson peg it up in the richest tournament in golf's history.

It is fair to say Chamblee tore these players a new one, describing them as "self serving" and "wilfully blind" for their participation.

His comments followed the news that PGA Tour commissioner Jay Monahan has served current and future Saudi rebels with suspensions.

"You're talking about him being ahead of icons in sports that are far more popular worldwide than the game of golf. And yet why is it that golf has four of the highest paid athletes of all time?

"Why is it that Phil Mickelson is 11th, in terms of the stratosphere he does occupy, as an athlete… that athletes who have made less money than him but play a sport that is widely more popular.

"Why is that? It's because of the image of the golfer. Because of their independent contract nature.

"Because they show up and, generally speaking, play a game that is self governed and self policing. It is a game of integrity. It's because corporations want to align themselves with these players. It's because of the philanthropic aspect of the game of golf.

"This is one of the saddest days in the history of golf. Watching these players come together for money and show to the world…they are showing us that they are the greediest, most self serving, self interesting, wilfully blind players in the world of golf today."