Golf fans were amused at this old post from LIV Golf player Lee Westwood that resurfaced on eve of Centurion Club opener. 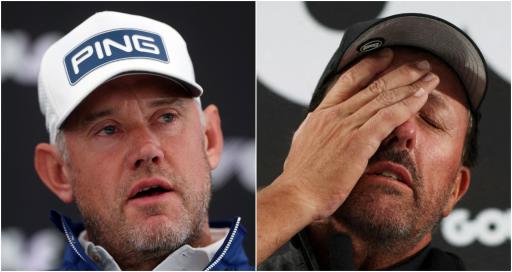 There's always a Tweet. At least this was the accusation aimed at LIV Golf player Lee Westwood this week.

The post in question was related to Westwood's take on the failed European Super League. That concept fizzled out quickly.

At the time, it was viewed as a money grab and was ultimately fled by embarrassed football club chiefs. Grovelling apologies were issued.

It was proposed that 20 of Europe's top teams would compete in a separate league. Most football fans seemed to absolutely hate it.

Including Nottingham Forest fan Westwood, who posted this interesting gif:

Here's how some golf fans reacted:

I’m surprised this is still up https://t.co/14yrItfS6p

Westwood faced the media this week ahead of the inaugral LIV Golf Invitational Series opener at Centurion Club.

Alongside his Ryder Cup Europe pal Ian Poulter, the pair were involved in an awkward exchange when pressed about sportswashing.

Poulter refused to answer the "hypothetical" question about whether or not there would be anywhere he wouldn't play golf on a moral basis.

Westwood, too, opted to defend his decision to play in the series which could ultimately rule him out one day being a Ryder Cup captain.

He said: "Yeah, at the end of the day, I'm a professional golfer, and I do it as a living. I've been very lucky. I've had a longer career than most people out here would have had. This is my 29th season.

"But you know, like you, if there's a pay increase, then at my age, I'd have to be stupid not to take it, or certainly have a good look at it and then not take it."