Bryson DeChambeau will peg it up with Donald Trump and Dustin Johnson at the LIV Golf Bedminster Pro-Am. 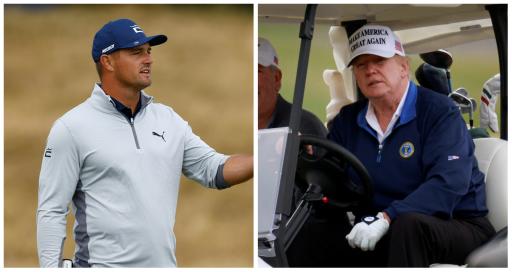 Bryson DeChambeau didn't exactly turn any heads when he signed for LIV Golf given his long-assumed interest.

And there wasn't really too much doubt that Donald Trump would be involved after the Saudi-backed series scheduled one of their mega million tournaments at one of his golf courses.

This week LIV Golf head to Trump National in Bedminster, New Jersey, for the third $25million tournament of their inaugural eight-event, $255million series.

If you think that sounds like a lot of money then you should check out how much they are playing for next season.

Trump has previously urged the PGA Tour players to join LIV, claiming that the bosses on the established American circuit are "disloyal".

Okay then. Maybe Trump had a word with DeChambeau before he finally signed that juicy deal said to be north of $100million.

Anyway, the cameras will be rolling at this week's Pro-Am on the controversial circuit as 45 is teeing it up with DeChambeau and Dustin Johnson.

We wonder what kind of score will be put up in this group.

This guy will be playing golf with one Donald J. Trump tomorrow. pic.twitter.com/z8lEe1Jw8k

More: Take a look at the teams in full for Bedminster

Families of the 9/11 victims and survivors have planned protests this week.

The tournament is being held less than 50 miles from Ground Zero.

The families have decried the players' decisions to join LIV, particularly the American players given Saudi Arabia's assumed role in the 9/11 attacks.

New LIV players Henrik Stenson and Paul Casey will be playing, along with Jason Kokrak and Charles Howell III.

Bubba Watson is the latest player said to have been signed a deal with LIV.

Trump has hit out at the accusations of sportswashing levelled at Saudi Arabia, saying: "I think it's going to be an incredible investment from that standpoint, and that's more valuable than lots of other things because you can't buy that — even with billions of dollars.

"I do think that the publicity that they've [Saudi Arabia] gotten, more than anything, has been a great thing for them. I think the publicity they've gotten is worth billions of dollars.

"It's one of the hottest things to have happened in sports, and sports is a big part of life."