The Open: Bryson DeChambeau on axing from Bridgestone? "I love them"

Bryson DeChambeau reacts to his axing from Bridgestone after his first round at the 150th Open Championship at St. Andrews. 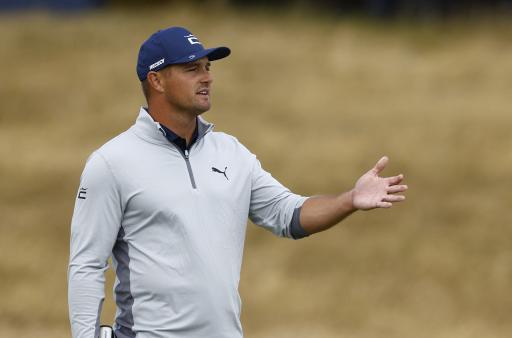 Bryson DeChambeau says he “loves” Bridgestone despite being axed by the company over his defection to LIV Golf.

DeChambeau, 28, made a strong start at the 150th Open Championship at St. Andrews and carded an opening round off 3-under par.

The American made a sloppy start when he dropped a shot at No.2 but rebounded with three birdies on the spin from the fifth hole.

Another birdie at No. 12 followed and despite dropping a shot at the par-4 16th he finished strongly with a birdie at the drivable, iconic 18th hole.

DeChambeau admitted that his hand is feeling good, despite still being a little bit tender after his first major round at the Old Course.

There was chatter before we got here that DeChambeau could be one of the players who could tear this course apart with a driver.

He didn’t rely too much on that during his first round as “that would go right into the fescue” so instead he was ripping his new driving iron.

That’s here to stay, DeChambeau said. It’s got 17 degrees of loft and apparently is a “low-flying machine”.

“This is about winning a major championship that I have to be strategic out here. There's no way to bomb and gouge it out this week,” he said.

DeChambeau was asked about how he prepares for a major championship when all the talk has been about LIV Golf.

He replied: “This is a major championship. I'm going into it with a mindset that I'm focused on trying to win this golf tournament.

“So, it hasn't been on the top of my mind. I've been focused on competing doing my best out here.”

Asked specifically about Tiger Woods’ LIV Golf comments, DeChambeau said: “I respect everybody's opinions. I have no position on it.

“Again, for me it was the best decision for me at that point in time and still is.”

News filtered through earlier in the week that Bridgestone has decided to part ways with DeChambeau.

Bridgestone, of course, have strong ties with the PGA Tour. The split was described as “amicable”.

Then he added: “I love them. I love what they do. I still will hopefully continue to have conversation with the R&D team all the time.

“I've given them five or six different little things that have helped improve the golf ball. And hopefully will continue to do so.

Was he surprised they severed ties with him?

Next page: Tiger Woods endures nightmare start to The Open