Bryson DeChambeau has revealed the last person you want to get in an altercation with in professional golf. 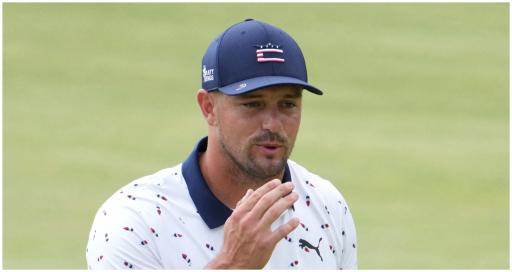 Bryson DeChambeau has revealed the last person he thinks you want to mess with in professional golf.

And it’s not a name that you would expect. Or maybe it is, if you know him.

It’s South African Shaun Norris, the 40-year-old journeyman who is constantly seen puffing away on cigarettes when he is playing golf.

DeChambeau was speaking to the Country Club Adjacent podcast in a light-hearted segment and he was asked who he “wouldn’t want to mess with”.

LIV Golf player DeChambeau confirmed it was Norris, adding: “You don’t want to mess with that guy. He smokes, like, 34 cigarettes a day.”

The host responded by saying: “You need an enforcer on the golf team, dude!”.

The American added: "No, he’ll look at you and kill you. Just by his looks. He’s crazy.”

DeChambeau, 28, also made some interesting revelations about his LIV Golf deal when speaking on the podcast.

He has confirmed that his deal with the controversial Saudi-backed league is four-and-a-half years long and that reports that it is worth $125m are “somewhat close”.

DeChambeau joked that almost all of it is already gone after he has invested in real estate and is planning on building a multi-sport complex in Dallas, Texas.

He has consistently fought off on the political nature of the LIV Golf league, insisting that he is not a politician.

When pressed on the source of the money, DeChambeau claimed he was going to be giving away a vast amount to charity and his foundation.

DeChambeau made his debut in LIV Golf in Portland last week at Pumpkin Ridge Golf Club in Portland where he finished 10th, earning $560,000.

He is the team captain of “Crushers GC” and welcomed new signee, England’s Paul Casey, to LIV Golf. Casey is a former UNICEF ambassador and faced criticism for his decision.

Still, if Casey et al have any trouble, then perhaps they can give Norris a call.

You don’t wanna mess with that guy.