Collin Morikawa is absolutely fed up of LIV Golf rumours: "Let it go!"

Collin Morikawa spoke to the media about LIV Golf rumours ahead of the Genesis Scottish Open at The Renaissance Club. 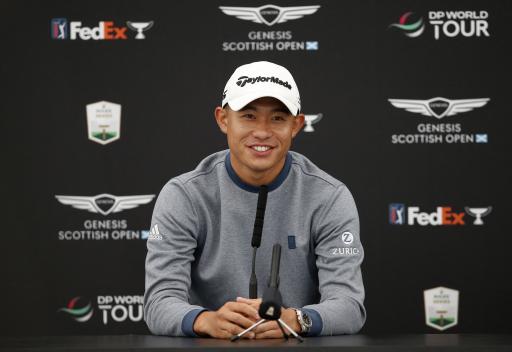 Collin Morikawa has one message to those suggesting that he could potentially be off to LIV Golf anytime soon: “Let it go.”

Morikawa was widely linked with a move over to LIV Golf and famously took to social media with what turned out to be an hilarious post.

He reiterated that he simply wasn’t going anywhere before informing his followers that he had to go and pour some cereal into his milk.

What kind of a savage does that?! Even Justin Thomas took issue with that. “You going milk first is more of a worry than you going anywhere,” he chimed in.

Still, Morikawa, 25 is absolutely fed up with it all. Speaking ahead of the Genesis Scottish Open, he told the media that one day he woke up to wild, wild speculation.

“I just woke up to people saying I was going somewhere when I obviously wasn't,” he told the media. “So, you had to shut it down.

“I think we all listened to Billy Horschel and what he said. It is frustrating. Someone that's 25 years old, right, I've done this for three years. All I've dreamt about is the PGA Tour, winning major, playing against the best in the world, being here together, yeah, it's annoying.

“I'm at this point now -- and it's funny because we go back to my press conference at the U.S. Open, and simply because I reiterated what Brooks had said that it was frustrating, that made it seem as if I was going to LIV.”

He continued: “Now if someone says it's frustrating and they compare it to Billy Horschel, does that mean they are all staying on the PGA Tour?

“It's funny because we all have our opinions, right, and we all have what we want to say but all want to do is focus on each week and focus on the tournaments.

“So that's why I said it at the U.S. Open because we are here at Brookline because there's a lot of history and I don't care about anything else.

“You know, we are here with an amazing field, 14 of the 15 best players in the world; that should be a story line.

“And then for next week, I could say a mouthful of me being defending champion, 150th Open, at St Andrews. Tiger Woods is playing again. I mean, does it get better than that? It's tough. It's tough to beat that.”

Woods was spotted today practicing with Rory McIlroy ahead of the 150th Open. He was absolutely mobbed by fans despite previously claiming he wanted to keep the location of his practice venue private.