Ian Poulter on LIV Golf animosity: "Nobody has said anything to my face"

LIV Golf player Ian Poulter says if there is a civil war in golf it is not apparent at the coalface ahead of the Scottish Open. 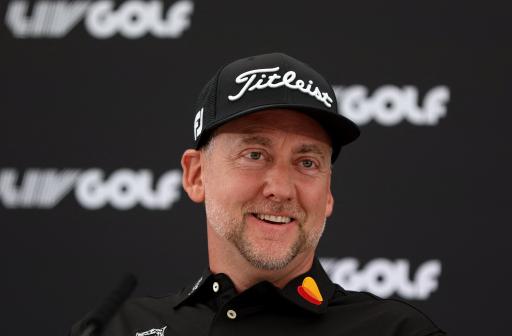 LIV Golf player Ian Poulter says he “has not faced any issues at all” over his involvement with the Genesis Scottish Open and “nobody has said anything to my face”.

The Englishman was originally blocked from playing at The Renaissance Club but an independent panel issued a stay over his £100k fine and ban, allowing him to join the field.

Earlier in the week his good friend Shane Lowry admitted there was no animosity between the players who have remained and those who have jumped ship. “We’re in the bar every night,” he said.

Poulter insists that the civil war is not apparent to him and that he is “comfortable” in the position that he is in. “This has always been my home for 24 years,” he said. “Why would that change?”

He continued: “I had a reception early this week [at the JP McManus Pro-Am at Adare Manor] as never before: 40,000 fans at the event and they were incredible.

“Not one bit of abuse, zero. Yes, social media is bad because that’s their forum to hide. We know that happens. It empowers people who can stay behind a screen. But to my face? Nothing.”

His colleague Billy Horschel absolutely ripped into the LIV Golf players earlier in the week, describing some players as “hypocrites”.

The American insisted he had no problem with players jumping ship for money, but urged them not to try and cherry pick the best aspects of the PGA Tour and DP World Tour in return.

“I haven’t felt any issues at all.” Poulter said. “It’s business, right? So business and personal are two completely different things. I am going to have a different opinion than some.

“Even if Thomas’s opinion is different to mine, I’m not going to fall out with him about it. I have known Thomas for 25 years. He is on the [European Tour] board and has the right to his opinion, I have a right to mine.

“There’s going to be a few people that are extremely strong-minded about it and there are others who are my friends; we will agree to disagree but remain friends.

“I had a good catch up with Rory and Thomas last week. It’s only ‘uncomfortable’ because that’s what is being written.”

Poulter insists that the bigger picture is the investment in golf. McIlroy, too, struck a different tone when speaking at the JP McManus Pro-Am.

The Northern Irishman has said that it would be beneficial for LIV Golf, the PGA Tour and DP World Tour to get round the negotiation table to navigate a path forward.

Poulter added: “It was OK to work in that little ecosystem for a while because they were negotiating and now they are not. Which is sad, because there is clearly space in the calendar with the space we have.

“It is not an easy process to go through. Social media and various people’s comments make it difficult.

"When you have been with a tour for 24 years and never given your card up, played 389 events and been as committed to this tour as anyone – quite a few have given their card up through the years. You don’t want to feel like you have been completely pushed out.”

Next page: Bryson DeChambeau on his LIV Golf deal