Phil Mickelson was goaded about Tiger Woods during the LIV Golf Invitational in Portland at Pumpkin Ridge Golf Club. 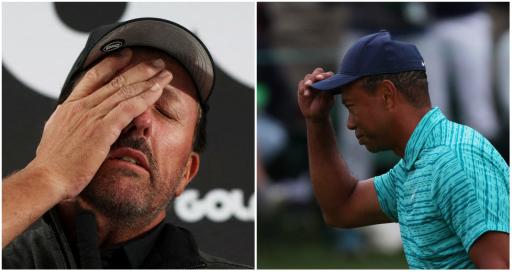 Even though Phil Mickelson is not playing on the PGA Tour anymore, he still can’t escape being goaded about his old rival Tiger Woods.

Mickelson was playing in the second $25m LIV Golf Invitational series event in when this rowdy fan decided to sound off on Lefty.

Putting for par at the 13th hole with an armlock putter during round one in Portland, Oregon at Pumpkin Ridge Golf Club, his effort from just on the green slides by the hole.

Mickelson looks a little bit frustrated as he struggled to get anything going on the day. With gritted teeth he walks up to the ball to tap in for bogey.

Then you can hear a fan shout: “Tiger would’ve made it!”

“Tiger would have made it…” pic.twitter.com/xDhUBvlElf

Mickelson ended up shooting 3-over par. Dustin Johnson, who has also signed a mega deal reportedly worth north of $100million to play LIV Golf, was only one stroke off the lead after round one.

Lefty confirmed reports that his deal is worth a reported mouth-watering $200m.

Mickelson has drawn criticism about his comments for being associated with the Saudi-backed series. He stepped away from the game for four months in early February after he admitted that working with the Saudis was tantamount to “sportswashing”.

He said he was happy to overlook Saudi Arabia’s human rights abuses as it was a “once-in-a-lifetime opportunity to re-shape the PGA Tour” and how it operates.

He later apologised for his “reckless” remarks.

What has Tiger Woods said about Mickelson?

Woods, 46, confirmed that he had not reached out to Mickelson during his break from the game.

He was asked about Mickelson before the U.S. Open, which Woods later withdrew from after the third round.

“He has his opinion on where he sees the game of golf going. I have my viewpoint how I see the game of golf. I’ve supported the Tour and my foundation has run events on the Tour for a number of years. I just think that what Jack [Nicklaus] and Arnold [Palmer] have done in starting the Tour, breaking away from the PGA of America and creating our tour in 1968 … I just think there’s a legacy to that. I’ve been playing out here for a couple of decades and I think there’s a legacy to it. I still think that the Tour has so much to offer, so much opportunity.