An unnamed DP World Tour player left some scathing remarks about the circuit and its future, showing no hesitation in joining the LIV Golf Invitational Series. 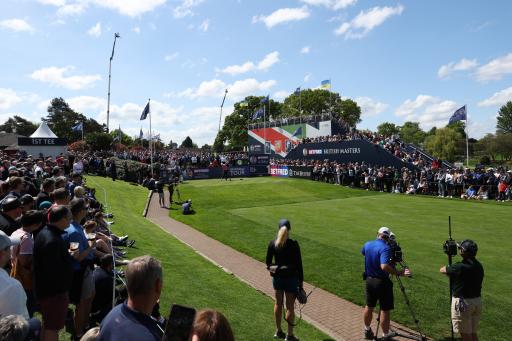 An unnamed golfer has blasted the DP World Tour and admits to being tempted by the riches of the LIV Golf Invitational Series.

As reported by Golf Digest, this player discussed the prize purse at the Betfred British Masters which was £1.85 million. The first LIV Golf event at Centurion Golf Club in June will have a purse of $20 million.

"I’m 41 and I don't want to be playing golf for the rest of my working life. This week (at the Betfred British Masters) we’re playing for €2 million, which is basically the same as 15 years ago. And I have to finish in the middle of the pack to clear maybe £1,000. That’s not much when expenses have quadrupled in that time," the player said.

"So I’m tempted. The tour doesn’t care about me. They say they do, but they don’t. If I disappeared tomorrow, it would make no difference to them.

"Plus, there is hypocrisy here. The Saudi event was OK for three years and now it’s not? I worry for the future of this tour. It might be here in 10 years' time, but I can’t imagine it will look like it does now."

The Saudi event which they refer to is likely to be the Saudi International which was sanctioned by the Asian Tour in 2022 when Harold Varner III claimed victory.

In the first three years of the event's four-year existence, it was sanctioned by the DP World Tour or when it was still named the European Tour.

The Saudi International had a strong field with the likes of Dustin Johnson, Sergio Garcia, Tyrrell Hatton and Bubba Watson in attendance. This event was reportedly used by representatives of the LIV Golf Invitational Series to enter talks with certain players about their breakaway league.

During the week at the Betfred British Masters at the Belfry, sensationally won Thorbjorn Olesen, Lee Westwood and Richard Bland revealed that they'd both requested releases from the DP World Tour and the PGA Tour to play at Centurion.

At the Wells Fargo Championship, Sergio Garcia revealed his intention to abandon the PGA Tour after a rules rant and it has been reported that two-time major champion Martin Kaymer could also compete under the commission of Greg Norman too.

The rise of the LIV Golf Invitational Series has caused hostility and conflict between players and golf's leading organisations. This has resulted in Phil Mickelson's exile from the game.

This unnamed player isn't on his own in expressing his intent to temporarily put the DP World Tour to one side, but they have certainly been more controversially vocal than most.

Next Page: Max Homa: What's in the bag of the two-time Wells Fargo champion?