Dustin Johnson: What's in the bag of the LIV Golf Boston winner?

Dustin Johnson banked a huge $4.75 million at The International in Boston when he rolled in his monster eagle putt to beat Joaquin Niemann and Anirban Lahiri in a playoff. 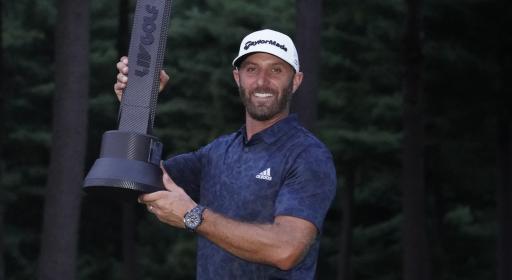 Dustin Johnson was part of the first LIV Golf roster to tee it up at Centurion at the start of June and four events down the line, he has picked up his first victory.

Johnson was reportedly given $100 million to sign up for the Saudi-backed series. He has now added another $4.75 million to this pot along with the money that he has already accumulated for winning three consecutive team events now too.

The two-time major champion holed a stunning eagle putt on the par-5 18th hole at The International near Boston to beat new LIV Golf recruits Joaquin Niemann and Anirban Lahiri in a playoff.

"It's a great victory. Obviously, we've got a great field, a lot of great players. Yeah, it's up there for sure," Johnson said on Sunday.

"The fans were unbelievable out there today, and then obviously to get the team victory, too, is just a big bonus, just because at one point I think we were on 12 tee, I was playing with Talor (Gooch) and there was a leaderboard. I think we were four back standing on 12 tee. We had, whatever, seven holes to play.

"But all the guys, I know they're all watching leaderboards, so we all rallied really hard to get another win, and I think that says a lot about the team."

Dustin Johnson - What's in the bag?