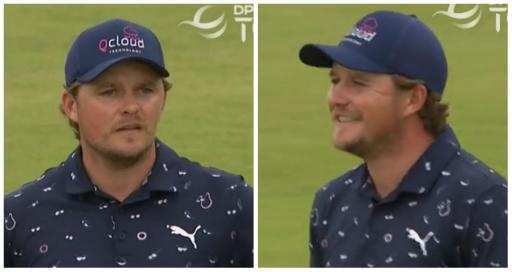 The Englishman, 31, is playing the Cazoo Classic at Hillside Golf Club in Southport.

His bogey-free opening round of 4-under 68 was highlighted by an incredible moment at the par-5 17th hole.

Pepperell holed out for eagle from 239 yards. It really was a remarkable shot. A beautiful, low slider that chased up onto the green and in.

And Pepperell gave us all a bit of his classic dry sense of humour by claiming the shot added a few million to his LIV price tag:

Added a few mil onto the price tag that one.

Pepperell has been vocal in the whole LIV Golf drama for a long time now. He called out Henrik Stenson this week after the Swede signed for LIV.

The English pro claimed he had no issue with players taking the money, but urged them to be honest.

He told Sky Sports: "I'm not surprised at all.

"You know, I'm not surprised. It's a shame and I think ... I hoped six months ago that none of this would happen. But it's happened.

"And clearly, to a person, I think they all regard their own back pocket to a higher degree than anything else and that's fine. Say it. It's fine. There's not a problem with that.

"But it's disappointing and I thought that the sport had more ... and the Ryder Cup had more monetary reward for playing a new tour that doesn't offer up much as far as I can tell, certainly competitively.