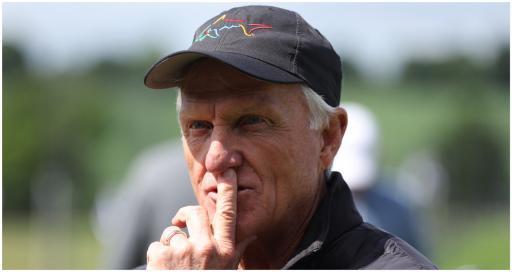 Greg Norman has revealed how LIV Golf will transition into a proper golf league format from 2023 onwards, following an interview with Australian Golf Digest.

Norman, 67, also told the publication that his phone has been off the hook as numerous agents of the world's top 40 players express continued interest in joining LIV Golf.

The only problem is Norman is fully booked, at least for now.

Related: Which golfers are playing in the next LIV Golf Bedminster tournament?

"The rumours are true [that LIV Golf will transition into a proper league in 2023] - we've closed up shop, as far as our players are concerned," Norman told Australian Golf Digest.

"We're in the process of kicking the league off next year and we're a full year ahead of schedule."

Henrik Stenson controversially joined LIV Golf this week ahead of their third tournament in Bedminster next week, and it cost him the Ryder Cup captaincy and one of his major sponsors in the process.

Jason Kokrak and Charles Howell III were also added to the field.

There will be a few more names added to LIV Golf this season, but the majority of bigger names are now likely to be announced ahead of 2023.

Rumours surfaced after the 150th Open Championship at St Andrews last week that new Open champion Cameron Smith is contemplating a move to LIV Golf and a signing-on fee north of $100 million.

There have also been rumours about many other PGA Tour players, which you can read more about in here.

Norman added: "There will be more player announcements before then, but we're set on the maximum amount of players.

"It's interesting, we're still getting calls from agents of top-40 players in the world wanting to join LIV but it's too late now.

"What it tells me though, is what we're doing is very appealing to the world's best players."

GolfMagic has received multiple rumours from insiders this week that adidas Golf is planning to buy out a LIV Golf team for $1 billion, but whether or not that will ever happen remains to be seen.

One major problem for LIV Golf is that OWGR points do not currently count in any of their 48-man, three-round tournaments.

But Norman remains confident in the strength of his application.

"The next, most important step outside of the players is getting OWGR points for our tournaments," Norman told Australian Golf Digest.

"We have worked hard to understand and meet the requirements to apply for OWGR points and have submitted our application. I am highly confident with our strength of field – which grows each week with player signings – and our individual format, that it puts us in a very good place to secure official OWGR points.

"When we officially have OWGR points for all our individual events, everything else looks after itself, which includes the majors."

Next Page: Hideki Matsuyama FORCED OUT of the 3M Open on the PGA Tour