The LPGA Tour commissioner says she'd take the call from Greg Norman's LIV Golf but "there's a lot of factors that need to be considered." 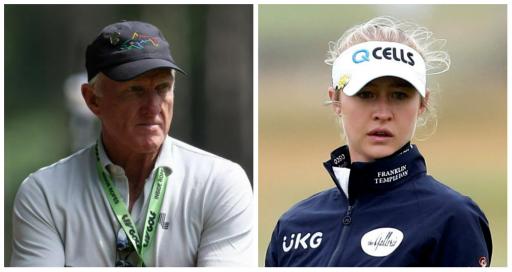 LPGA Tour commissioner Mollie Marcoux Samaan says she would "take the call" if Greg Norman's LIV Golf got in contact.

In an interview with The Times of London, she says it's her responsibility to evaluate every opportunity.

"I would engage in a conversation if it would achieve our aim of promoting women's golf but there needs to be input from players and sponsors," she told the paper.

"There's a lot of factors to consider before we do business with LIV Golf."

Clearly, this strikes a completely different tone to that of PGA Tour commissioner Jay Monahan, who has described LIV Golf as a series of exhibition tournaments.

Although conceding that the PGA Tour "cannot compete in dollar bills" with the Saudi-backed series, Monahan clearly views LIV as an existential threat and appears unlikely to proceed with any kind of peace talks with Norman.

Her comments are an interesting development, considering Norman previously claimed that an offer by LIV Golf to align with the Ladies European Tour and LPGA Tour was turned down.

At the time, Norman said: "Well, we did approach the LET and the LPGA with a substantial investment [offer].

"We were rejected. So who is suppressing women's golf, quite honestly?

"We offered that up. We may have a different strategy going forward, so sit back and wait. We're here for a long, long period of time. We're here to grow the game of golf on a global basis, not just in one specific sector [men's], it's across the board.

Clearly, it is a difficult situation to navigate for the LPGA Tour.

But it's also apparent that there are considerable financial differences between the prize purses and sponsorships across professional golf.

The women already have six Ladies European Tour events which are sponsored by Aramco, the state-owned Saudi Arabian oil company.

Furthermore, three of the highest-ranked players in Europe are sponsored by Golf Saudi.

In other LIV developments, former NBA legend Charles Barkley has revealed he met with the upstart and is currently mulling over an offer.

Barkley said LIV would have to offer him "crazy numbers" because he might have to lose his gig at TNT and sponsors.

"I got no idea what Greg's gonna say to me, but if I'm going to lose TNT and my commercials, it will have to be a ridiculous number for me to move on," he said.

Next page: Henrik Stenson dropped by sponsor over LIV deal