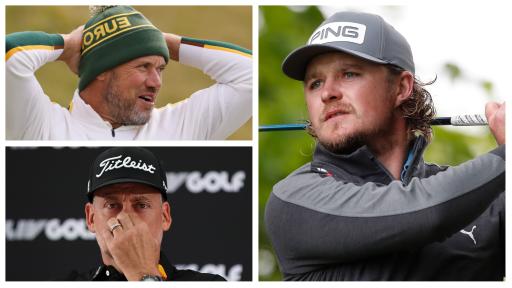 Eddie Pepperell has accused Greg Norman, Lee Westwood and Ian Poulter of not caring about the DP World Tour after joining the LIV Golf Invitational Series.

In a damning new interview with David Walsh of the Sunday Times, Pepperell admitted his friendship with players such as Laurie Canter will be tested if the new series leads to the demise of the DP World Tour.

The old European Tour is in a very vulnerable position as they stand to lose players to the LIV Golf Series and their strategic alliance with the PGA Tour is being tested to the limit.

Pepperell, a two-time winner on the circuit, gave strong views on some of Europe's most recognisable players who have brought eyes to the tour and the Ryder Cup down the years.

"I don’t think Lee Westwood and Ian Poulter give a s*** and they don’t need to care. They’re going to be done with the game in three or four years. Greg Norman doesn’t give a cr*p. He can sail off into the sunset on a yacht. There’s no risk for Greg Norman. He’s done," Pepperell said.

"The risk is on the shoulders of the younger players. They will be rewarded in the short-term but, ultimately, it’s a big gamble.

"Let’s say the worst comes to the worst and in five years the European Tour no longer exists as it is today and LIV Golf has grown into something bigger and there are 100 players out of work because of that.

"There will be accusations thrown at these players, Laurie included, that they helped put these guys out of work."

The 31-year-old is entered in the BMW International Open in Germany this week, the week when the tour's CEO Keith Pelley is set to announce his decision on how to handle the LIV Golf rebels.

The PGA Tor immediately suspended their defectors, but the silence has been deafening from the DP World Tour. Could they also suspend their players or offer an out for the American stars who could now have gaps in their calendar?

A sense of betrayal is certainly in the air and it was in the air with Pepperell's comments too. He will be playing alongside the likes of Bernd Wiesberger, Pablo Larrazabal and Adrian Otaegui this week who also played in the first LIV Golf event near London.

"If this happens and we look back and conclude that LIV Golf put the knife into the back of the European Tour, how are Westwood and Poulter and Sergio (Garcia) and these guys going to feel about themselves knowing they have been complicit?

"I rooted for Sergio, the player. It’s hard to root for Sergio, the man. The way these guys speak, quite gleefully, about what they’ve done, well, it’s just disappointing."