Eddie Pepperell on why he'd turn down a $20million, four-year LIV Golf offer

England's Eddie Pepperell says he would turn down an offer of $20million to play for LIV Golf. 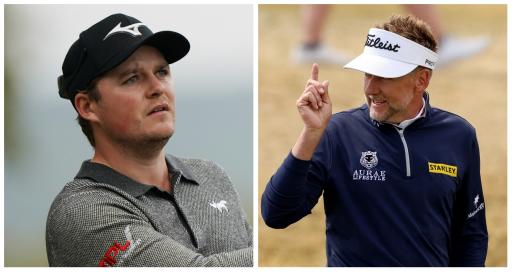 England's Eddie Pepperell says he would turn down an offer of $20million to play in the LIV Golf series.

The 31-year-old two-time European Tour winner has been one of the harshest critics of the Saudi-backed series.

He's spoken of his disappointment of players such as Sergio Garcia and Henrik Stenson's choices to jump over.

Related Articles
Koepka: "Playing all over the world was one of the reasons I joined LIV Golf"
LIV Golf's Dustin Johnson and Brooks Koepka in worst OWGR spots since 2015

The pro recently joined GOLF'S Dylan Deither on a podcast to discuss the topic.

LIV Golf will host it's third tournament of their inaugural eight-event series at Trump National in Bedminster, New Jersey this weekend.

He told Dethier: "To me, they are all self-serving decisions, [I] totally understand it. The money on offer is just incredible.

"But, ultimately, the game is going to suffer for it. It's going to become more fragmented. This is all happening and spearheaded by Greg Norman who has a very vengeful streak in him towards the PGA Tour.

"And it's funded by a Public Investment Fund, or a sovereign wealth fund effectively, of a state that obviously has a questionable background.

"I think there's lots of ways you can look at it but, ultimately, it's ... I am disappointed in all of them [the players who have joined LIV].

"I'm somewhat exasperated to understand why anyone who is under the age of 35 would go. I can't quite fathom why anyone young and up and coming would think about that."

Pepperell was asked what he would say to the hypothetical offer of a $20million, four-year deal with the series.

"I wouldn't do it for the very things I've just talked about. You know, I've had sponsorship offers from a very closely related organisation to what we see and I've turned it down.

"Now that's me making a judgement call that I'm entitled to make just as these guys are. I've personally never done anything in this game for money.

"But the money is a by-product of playing good golf and crikey as even I've experienced in my own career when I've done well, you know, we've earned a lot of money."

The pro said it was always his dream to play golf on the European Tour, which has now re-branded to the DP World Tour.

He added: "To think that I would be doing something that would be causing significant commercial damage to that [the DP World Tour] is something that I would think long and hard about and ultimately I am almost 100 per cent sure I would come down on the side of not accepting."

Pepperell said LIV Golf was an unmeritocratic system with an uncompetitive format.

"It's really nothing that I think the game of golf should represent and indeed has represented through history. I am very much on the side of somebody like Martin Slumbers [the R&A chief executive] who described it as that way."