New LIV Golf signee Henrik Stenson and Donald Trump will be targeted by the 9/11 families protesting the controversial series. 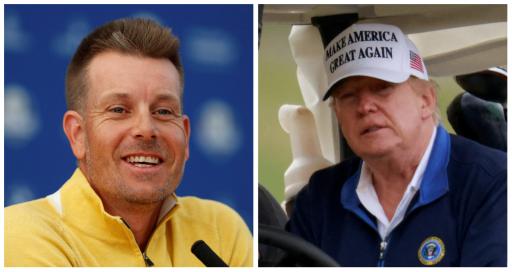 Henrik Stenson and Donald Trump will be specifically targeted by the 9/11 families protesting the LIV Golf Invitational series in New Jersey this weekend.

The third LIV Golf event of the inaugural $255million series heads to Trump National Bedminster, which is located less than 50 miles from Ground Zero.

Terry Strada, the chair of 9/11 Families United, will speak to the media before the shotgun start tournament which has a field of 48 players. Stenson was axed as the Ryder Cup Europe captain after he decided to join the Saudi-backed series.

Strada has taken aim at the LIV players, alleging the players are complicit in "the sportswashing of crown prince Mohammed bin Salman to evade the responsibility he has to each 9/11 family member and survivor."

9/11 Families United were also in attendance at the LIV event in Portland a few weeks ago at Pumpkin Ridge Golf Club. South Africa's Branden Grace won the tournament and $4million.

More: LIV Golf to feature relegation from next year

Strada added: "Henrik Stenson will now be remembered as just another exhibition golfer to be exploited by the kingdom to do its dirty work and try to clean up their image as being the country that unleashed extremism on the world, resulting in the murder of nearly 3,000 innocent people on American soil on Sept 11, 2001.

"I read him [Stenson] rattling off the Saudi talking points like a trained seal learns how to 'bark' for a treat. 'The Ryder Cup will survive without him…'"

He previously wrote: "All of those golfers that remain 'loyal' to the very disloyal PGA, in all of its different forms, will pay a big price when the inevitable MERGER with LIV comes, and you get nothing but a big 'thank you' from PGA officials who are making Millions of Dollars a year.

"If you don’t take the money now, you will get nothing after the merger takes place, and only say how smart the original signees were."