"I got respect for Rory as a player" - Brooks Koepka responds after hearing what Rory McIlroy had to say about his decision to break away from the PGA Tour to join LIV Golf. 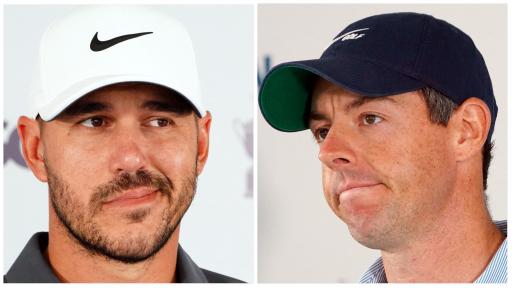 Brooks Koepka says he respects Rory McIlroy "as a player" as he spoke to the media for the first time since breaking away from the PGA Tour to join the contorversial Saudi-funded LIV Golf Invitational Series.

Koepka, who is making his LIV Golf debut at their second ever tournament in Portland this week, was quizzed by the media as to what he made of McIlroy's comments from last week.

Related: Brooks Koepka claims his LIV Golf decision was made after the US Open, but nobody quite believes him

McIlroy was left stunned by Koepka's U-turn on LIV Golf when he was informed about his decison during the Travelers Championship, which fell straight after the US Open.

"Am I surprised? Yes, because of what he said previously," said McIlroy. "I think that's why I'm surprised at a lot of these guys because they say one thing and then they do another and I don't understand.

"I don't know if that's for legal reasons or if they can't - I have no idea - but it's pretty duplicitous on their part to say one thing and then do another thing, in public and in private."

Koepka, who blasted the media for even bringing up the subject of LIV Golf during the US Open, hit back at McIlroy ahead of his LIV Golf debut this week.

The American claims to have respect for McIlroy as a golfer, but his words suggest less so away from the course.

"Look, I got respect for Rory as a player. He's good. He's phenomenal," said Koepka.

"I'll be honest with you. I didn't see it. I didn't hear about it until basically like a day ago. So, look, he's entitled to his opinion.

It has been reported by multiple publications that Koepka has received in the region of $150 million to play LIV Golf events.

Dustin Johnson received a similar sum after breaking away from the PGA Tour, and Phil Mickelson has pocketed $200 million.

It is understood Bryson DeChambeau has received in excess of $100 million for his services to LIV Golf.

Koepka, who sat in his LIV Golf press conference alongside fellow Saudi golf rebels Pat Perez and Patrick Reed, was asked by one journalist for his thoughts on the country's awful human rights record.

But as seems to be the norm in these interviews, Koepka, Perez and Reed were more than prepared to just shrug it all off.

Watch what they had to say, or not as the case turned out to be:

Next Page: Lee Westwood does not believe the Ryder Cup should be threatened by LIV Golf