LIV Golf Tour chief executive Greg Norman was given a new haircut by Cameron Smith after the second round of the controversial series' event in Chicago. 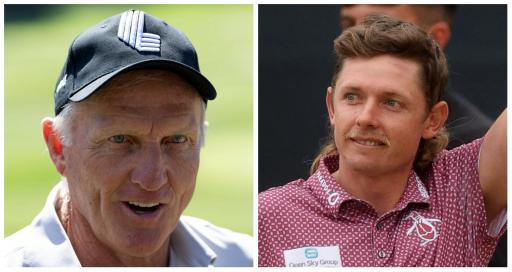 Greg Norman appears to have escalated his bromance with Cameron Smith after the second round of LIV Golf Chicago.

Norman, 67, upped the ante earlier in the week when he claimed he now no longer wants to sit down for peace talks with PGA Tour bosses.

He also waxed lyrical on how he lured Smith to LIV in the first place, claiming the Australian understands things others simply do not.

And it seems that Norman is happy to continue with simply outlandish gimmicks to back up their idea that LIV is simply golf, but louder!

In recent weeks, Norman confirmed that LIV players are now allowed to wear shorts. The PGA Tour have yet to respond to this.

Norman also parachuted in to LIV's fourth event in Boston, which was won by Dustin Johnson

Related: DJ may have just landed himself in hot water with Paulina Gretzky

Now, Norman has decided to have a haircut. And all in the name of charity. Smith was even on hand to give The Great White Shark the new style himself.

How did the #LIVGolfChicago tournament leader wind down after Saturday’s round?

By giving the Commissioner a mullet for charity. pic.twitter.com/8pJi456zru

Well, we have no confirmation of how long Norman will be keeping the mullet. Here's how golf fans reacted to Smith's mullet when he first rocked up with it on the PGA Tour.

Earlier in the week, LIV Golf were giving out free mullets to fans.

Next page: NBA legend rocks up at LIV Golf Chicago