Bryson DeChambeau was completely wiped out by a rope during the final round of the LIV Golf Invitational Series event in Chicago. 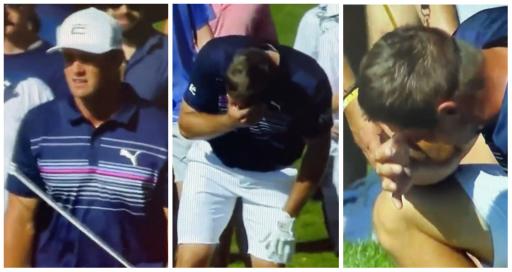 The LIV Golf Invitational Series commentary team joked that Bryson DeChambeau's caddie was wearing a "moral compass" during the final round of their event in Chicago, moments before the American was taken out...by a rope.

DeChambeau's caddie Brian Zeigler was spotted wearing a compass around his neck at Rich Harvest Farms during the third round of the fifth $25m event in the controversial series' inaugural season.

It led to a discussion between lead commentator Arlo White and lead analyst David Feherty, who turned heads when even he called BS on some LIV Golf Tour players' claims that they were "growing the game" by joining Greg Norman's league.

"Brian Zeigler there with a compass hanging around his neck," said Feherty. "You don't find too many caddies with a compass. There could be a barometer in his back pocket, you never know with Bryson."

White then asks: "Could it be a moral compass?"

His comments are clearly referencing the fact LIV Golf Tour players have faced a barrage of criticism over their decision play in the league despite the fact it is being bankrolled by Saudi Arabia's Public Investment Fund.

Critics argue that the kingdom is attempt to soften its global image through sport, known as sportswashing.

DeChambeau caught the headlines earlier in the week when he spoke on the topic of the Ryder Cup and Presidents Cup.

LIV players are currently ineligible to compete in these events, something which DeChambeau, who turned 29 this week, believes is not right.

Bryson DeChambeau gets demolished by a rope

The cameras also caught this happening to DeChambeau during the final round broadcast.

Bryson just got DEMOLISHED by a rope. pic.twitter.com/x6e4b0ixah

The viral clip has since received some classic WWE commentary from Jim Ross!

Next page: Why is Greg Norman's tournament still on PGA schedule?